Barnaby Joyce to challenge for leadership of Nationals

admin February 2, 2020 Federal Politics Comments Off on Barnaby Joyce to challenge for leadership of Nationals 46 Views 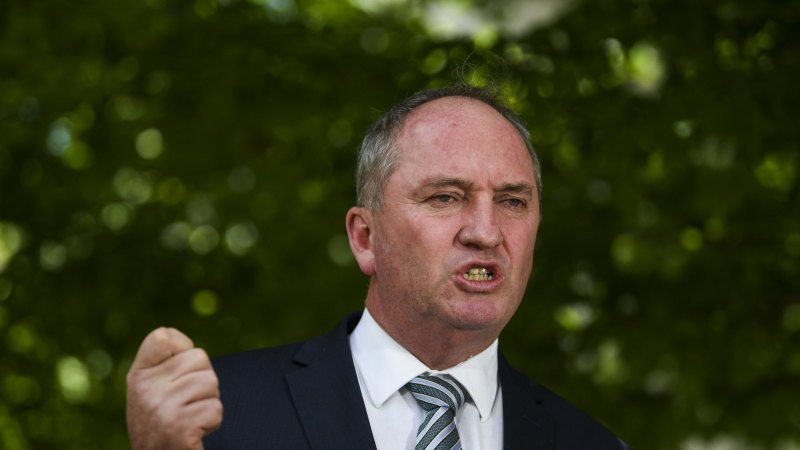 “I’m sure Barnaby is ready to be the leader of the party should there be a spill called, but there has been no spill called, there is no vacancy for the leadership position.”

Mr McCormack said none of his colleagues had called him about a leadership spill.

“I have the overwhelming majority support in the party room and of course I’m going to continue as the Nationals party leader as my colleagues want and, I think, as regional Australians expect,” he said.

The Deputy Prime Minister’s statement at a press conference in Parliament House came about one hour after Mr Joyce confirmed his ambition.

“I’ve done the job before….Now’s the time to do it, two years before the next election.”

Agriculture Minister Bridget McKenzie resigned from federal cabinet on Sunday over her role in the “sports rorts” saga which has engulfed the Morrison government for more than a fortnight.

Nationals leader and Deputy Prime Minister Michael McCormack will convene a meeting of the party at 9am on Tuesday morning to hold a ballot to replace his former deputy.

Senator McKenzie’s resignation opens up the positions of deputy leader, Senate leader and cabinet minister, and an outer ministry post.

Dr Gillespie confirmed on Monday morning he was seeking the deputy’s position.

“What I am putting my hand up for is the deputy leadership position,” he said.

“It comes at the pleasure of my colleagues. If they don’t think I’m the one, and one of the colleagues gets it, then I’ll live with that, but I’m certainly putting my hand up.”

Asked if anyone was pushing for a leadership spill, Dr Gillespie said that was “not on the agenda” but that “anything could happen” in the Nationals.

Others described the situation as highly volatile and unpredictable, splintering the 21 members of the Nationals party room in a way that could threaten Mr McCormack’s leadership.

Finance Minister Mathias Cormann said on RN Breakfast on Monday morning that it was “entirely a matter for the Nationals party” and said he had worked well with both Mr Joyce and Mr McCormack.

Stephanie Peatling is a senior writer for The Sydney Morning Herald and The Age.

It was the first time Morrison had spoken publicly about this little-known new virus. He …