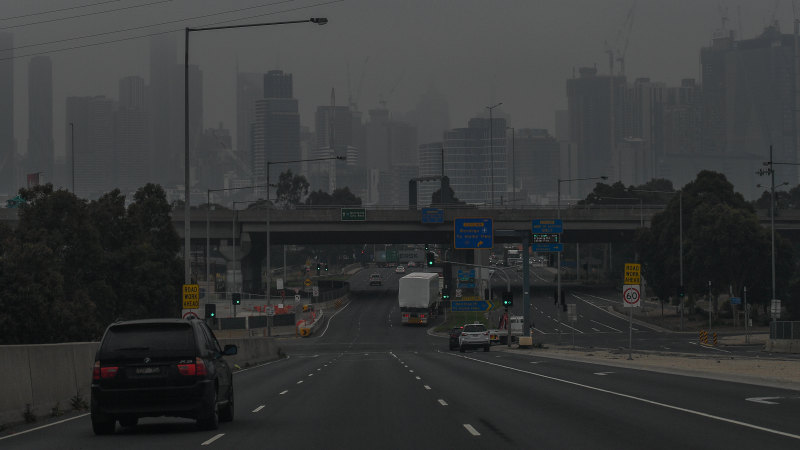 “We’ve had easterly winds, and a sustained period of that is likely to have brought smoke into the Melbourne area over the last day or two,” senior forecaster Richard Carlyon said.

“It’s going to be around for a while because the winds are out of the east for quite some time, even well into next week. There’s no wind changes coming, through. There’s no real hot days either, so no northerly winds.”

The EPA said venturing outdoors with poor air quality was alright for most people, who should continue monitoring conditions. Vulnerable people or those with respiratory issues should reduce prolonged or heavy physical activity.

“From our weather perspective, it’s a mix of fog and low cloud and smoke haze as well,” he said.

“It’s humid, and we’ve had clear skies and light winds and stable conditions overnight. That’s led to the development of fog and low cloud.”

Air quality was tipped to be “poor” in East Gippsland on Friday, after weeks of “very poor” and even “hazardous” conditions.

Melbourne momentarily choked in hazardous conditions at the start of the year during the worst of Victoria’s bushfire crisis.

The weather bureau said a humid and unstable air mass could also pose a thunderstorm risk for much of Victoria, but would likely miss Melbourne.

Heavy rainfall is also forecast for parts of the state during slow-moving storms on Friday.

The temperature in Melbourne is expected to hit 26 degrees on Friday, with a slight chance of a shower or thunderstorms in the outer suburbs on Friday afternoon or evening.

Plea for firms to donate protective gear for healthcare training