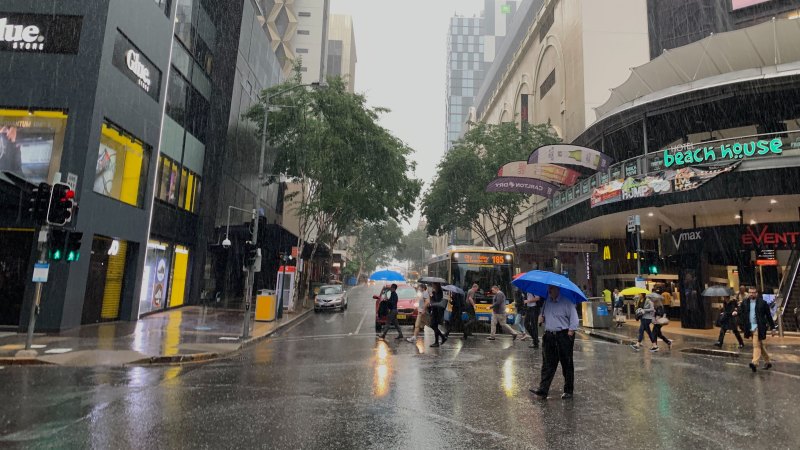 In South Brisbane, flooding on Vulture Street between Merivale and Grey streets had left vehicles stuck in the middle of the road just before 7am, with diversions in place for two hours during the morning traffic peak.

By 9.20am, Translink warned all Brisbane buses were delayed up to 60 minutes because of the weather and heavy traffic congestion. A number of King George Square station stops were also unavailable.

Queensland Traffic Metro also warned of crashes at the centre and right lane of the M3 at Greenslopes after the Marquis Street on-ramp, while in Coorparoo, traffic signals at Old Cleveland Road and French Street were flashing yellow after another accident.

Almost 5000 Energex customers were without power across south-east Queensland as of 11am, more than half of which in Chermside West and Kangaroo Point.

The Bureau of Meteorology had said the rain would be heaviest on Wednesday and Thursday but these have not been as high as initially predicted, though the chance of storms and flash flooding remained.

Rain totals of more than 200mm had been recorded to 9am Wednesday, continuing overnight. Since then, Tin Can Bay had recorded 228 millimetres – the highest total in the state.

Nearby Mount Eliot, Mount Bilewilam and Coops Corner also recorded totals of more than 200 millimetres, with falls of 50 to 100 millimetres stretching north to Hervey Bay and south to Eumundi on the Sunshine Coast.

The heavy rainfall was likely to cause river level rises on the Mary River to Gympie on Thursday and downstream of Miva, the bureau said. Rises in Six Mile Creek and Tinana Creek – which had reached a minor flood by 10am – were also expected.

River level rises along the Burrum and Cherwell rivers, inland from Hervey Bay, were also possible.

“We did have a coastal trough forming off the Sunshine Coast and we were forecasting 100-150 millimetres, but that depended on the passage of an upper trough,” he said.

“The upper trough did not move as quickly as was forecast, that trough did not deepen and so we did not get the significant rainfall totals we are expecting.”

Lytton in Brisbane’s west had received the highest total, with 106 millimetres of rain in the 24 hours to Thursday morning, with falls of between 50 and 99 millimetres across the rest of the city.

In the Western Downs, three people were rescued after their vehicle was washed away by floodwater on Wednesday night.

Police, SES crews and swift water rescue teams were called to Waikola, about 310 kilometres north-west of Toowoomba, after 3pm when the trio managed to escape their vehicle when it was washed away as they tried to drive through a flooded causeway.

A Queensland Fire and Emergency Services spokeswoman said swift water rescue crews reached the trio about 6pm. They were on dry land, but trapped between a swollen creek and river.