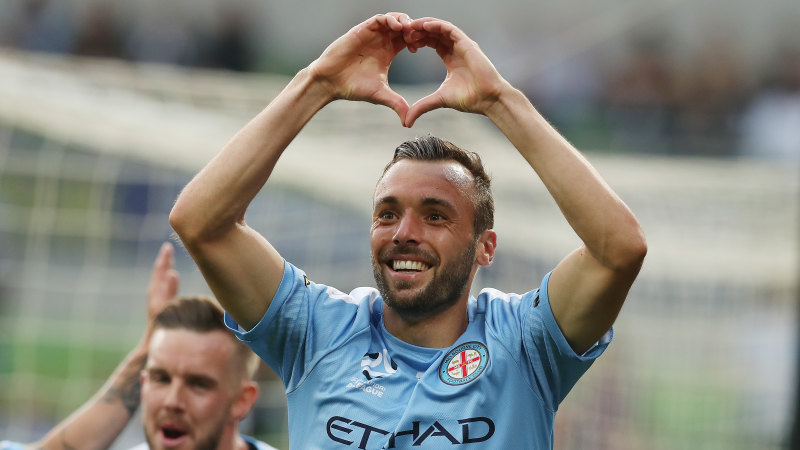 ”His attitude is wonderful, he is a very good person, he works very hard and maybe I help him because we are French and maybe the communication is easier. We change also his position, he is now more a midfielder and this positioning helped him also,” Mombaerts said.

”He worked very, very hard, and he wants to change, he is more involved offensively, he increases his aggressiveness and he becomes a very good player.”

City looked the more assured of the teams for much of this game although the possession statistics favoured their opponents.

Mombaerts side might not have created too many clear chances, but they scored two excellent goals, illustrating that they were sharp enough to manufacture opportunities and take them when it mattered. Their strategy of sitting back and hitting on the counter paid dividends.

Adrian Luna’s return to action – he had missed the dismal defeat in Adelaide the week before – also helped spark City.

”Luna is fantastic. He is playing very well. We missed Adrian against Adelaide. He got a little injury in his knee, but at the moment he is a top player,” Mombaerts said post game.

Luna skilfully set up Berenguer for the opening goal in the eighth minute and the Uruguayan worked hard and ran between the lines all evening.

City’s second goal was an excellent team effort involving Maclaren, Craig Noone and Berenguer, whose back-heel set up Socceroos striker Maclaren to finish inside the penalty area for his 14th goal of the season, one less than current Golden Boot leader Adam Le Fondre of Sydney.

”We scored a fantastic second goal. The two goals we scored were two great goals,” a happy Mombaerts said.

Still, he still has plenty of injury concerns to deal with.

Centre back Jack Hendry is out until the end of the season – he hopes to return for the play offs – with a medial ligament injury while Harrison Delbridge, the right sided stopper, will also miss next weekend’s trip to Wellington through suspension.  Rostyn Griffiths did well when deployed as a central defender and the tall midfielder will most likely have to occupy a similar role next week.

Mombaerts could afford to be generous about the errors made by Olyroos goalkeeper Tom Glover which on another day could have cost his side the game.

The shot stopper, in because Dean Bouzanis had to miss the game for family reasons, made his first blunder on the half-hour mark when he picked up the ball from what appeared to be a back pass from Griffiths, giving Victory an indirect free kick inside the penalty area. City was lucky to escape intact from Ola Toivonen’s close-range drive.

But Glover’s luck ran out 12 minutes from time when he somehow fumbled and let what appeared to be a regulation Toivonen free kick squirm through his hands and into the net.

It made for a nervous finale for City, but in the end they came through and showed that, on this occasion at least, they could get through a high-pressure game and come up on the right side.

Mombaerts said the free kick error was a warning to Glover to keep his concentration up.

”The goalkeeper has to be concentrated all times. It was an easy ball. You have to keep concentrating all the time, especially in simple things. He is young and he has to learn about his mistake, but I trust him.”