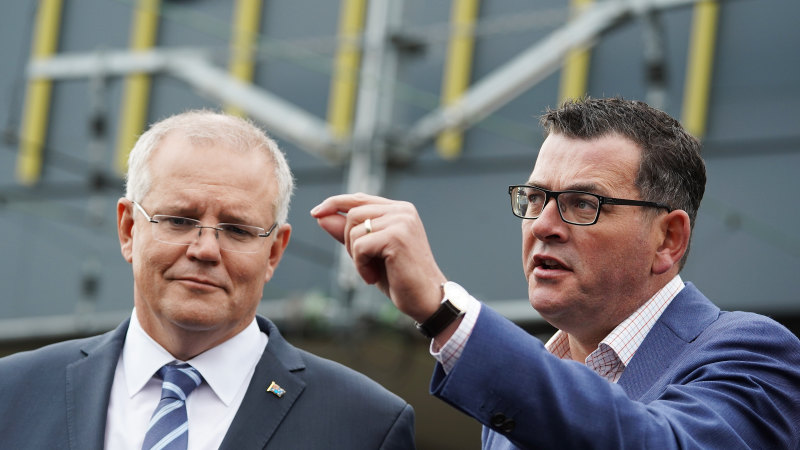 The politicians are considering running airport trains along existing railway between the city and Sunshine and through the new $11 billion Metro Tunnel. New track between Tullamarine and Sunshine would be built.

If this option is chosen, it would likely cancel the consortium’s market-led proposal to build a new rail tunnel, which the companies claim would see airport rail run 24/7 express trains every 10 minutes, with trips to take 20 minutes.

The consortium comprising Metro Trains, Southern Cross station and Melbourne Airport would charge the state government a negotiated “access payment” every time a Metro or V/Line train is run through the tunnel.

The fee would be charged in exchange for building, operating and maintaining the tunnel.

Senior figures in the Andrews government are understood to be wary of committing to this option, due to concerns about a major piece of Victoria’s rail network being controlled by private players.

But IFM says it wants to operate the tunnel over a 40-year concession period but was open to exploring a shorter concession period. It would hand over the infrastructure and operations back to government “at no additional cost”.

The company insisted it was “not seeking excessive returns, only a fair return commensurate with the risks transferred”.

The airport rail tunnel was much cheaper than the Metro Tunnel or Melbourne Metro 2 – another underground train line beneath the city being planned for by bureaucrats but not yet committed to by government.

“The key areas of risk associated with MM1 [Metro Tunnel] included underground station integrations and Yarra River underpasses which are not a factor under our proposed solution,” the letter stated.

The access payment to use the tunnel would be “determined upfront” with the state government to “recover an appropriate share of the significant capital cost of building the tunnel from regional trains that use the infrastructure”.

“We are open to receiving governments’ feedback regarding our target return expectations. We know our target return is lower than those on other recent infrastructure construction projects and we are happy to discuss the concept of a ‘fair return’ for the seven million Australian workers’ capital whose money we invest.”

The letter also stated the company did not wish to constrain other regional or metro services at the expense of more airport trains.

“The decision-making on services, pricing and timetabling would remain entirely with the Victorian government.”

An airport rail tunnel has not been ruled out by either government, with Labor promising before the election to build new tracks between the city and Sunshine – most likely through a tunnel – while Prime Minister Scott Morrison called for a “quick link” airport tunnel in September last year.

The state government is believed to be considering an airport rail option that includes fast rail to Geelong and Ballarat and more train services to Melbourne’s west.

A state government spokeswoman said it was inappropriate to comment on the market-led proposal while a decision on the project is still being made.

“We continue to work closely with the federal government on the best design for airport rail – that will get people to and from the airport quickly with minimal interchanges.

“All options being assessed for the Airport Rail will stop at Sunshine for connections to Victoria’s major regional rail lines – Geelong, Ballarat and Bendigo.”

Federal Minister for Population, Cities and Urban Infrastructure Alan Tudge said the government was working with Victoria on the best design for airport rail.

“Our ambition is to have a train journey to the airport from the city that is fast, affordable and meets the needs of travellers.

We want to see the Melbourne airport rail link built as soon as possible.”

“I’m really not sure how to take it, it’s ridiculous,” Ms Farrell said. She said …