Tokyo one step closer for Matildas after Thailand thrashing

admin February 10, 2020 Sport Comments Off on Tokyo one step closer for Matildas after Thailand thrashing 27 Views 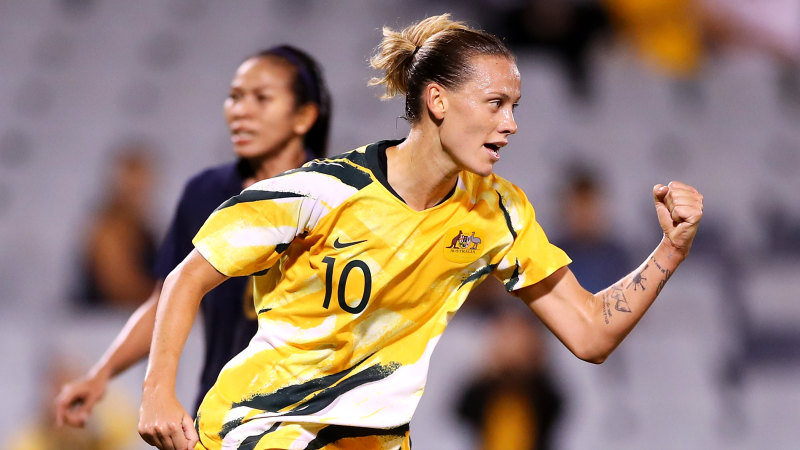 Once again coach Ante Milicic chose not to start captain Sam Kerr, who is continuing her comeback from a quad strain and came off the bench midway through the second half.

The Matildas began the match with high intensity but little cohesion. Their aggressive game plan pegged the Thais deep in their own half but struggled to breach the visitors’ defensive line.

The few times they went direct in attack, they looked dangerous. Fullback Ellie Carpenter’s distribution from deep caused havoc for Thailand’s defence and only wasteful finishing from others prevented her crosses from turning into the net. She picked out van Egmond in the 18th minute but the midfielder mistimed her volley before striker Caitlin Foord wasted a good chance from close range minutes later.

With one of their most direct attacks of the night, the Matildas finally got their breakthrough minutes before half-time. Another dangerous Carpenter cross found van Egmond at the far post who prodded a volley into the net, via the upright, to make it 1-0. On the stroke of half-time, van Egmond doubled her tally with a calmly taken side-foot shot inside the box.

Needing to boost their goal difference, the Matildas unsurprisingly threw numbers forward in search of a third and nearly had it moments after the restart. Foord’s close-range shot beat the goalkeeper but was deflected wide by a covering defender.

Just before the hour, Milicic added more firepower to his attack, bringing Kerr and Raso on to form a four-pronged forward line. Within minutes, that attacking juggernaut yielded results.

Thailand simply couldn’t cope with the numbers forward, allowing Simon to net the Matildas’ third. Completely unmarked, the experienced forward flung herself at Karly Roestbakken’s cross, doing just enough to turn it into the net in the 67th minute. From the next attack, the Matildas found the fourth they desperately needed. Van Egmond sealed her hat-trick after receiving a cutback from Kerr at the far post to slot the goal that put the Matildas in the box seat to finish top of their group.

Before the fans had finished applauding, Raso struck Australia’s fifth, the substitute slamming a half-volley into the corner of the net. Thailand’s defence had ground to a halt by then and Simon netted her second with a header in the 72nd minute and received a standing ovation when substituted for Tameka Yallop.

It should have been seven in injury time but Foord yet again spurned another good chance. The striker hit the post from an acute angle, failing to spot the unmarked Kerr in front of goal. It mattered little and the Matildas head into Thursday’s decider against China needing only a point to top their group and play Vietnam for a place in the 12-team tournament in Tokyo.

South Korea beat Vietnam 3-0 on Sunday to top Group A, with the Vietnamese having already beaten Myanmar to secure their place. The Koreans are ranked No.20, Vietnam No.32.