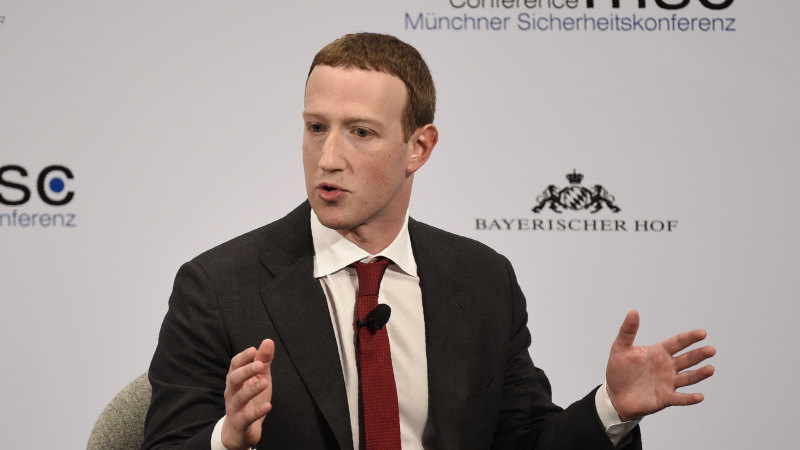 “Right now there are two frameworks that I think people have for existing industries – there’s like newspapers and existing media, and then there’s the telco-type model, which is ‘the data just flows through you’, but you’re not going to hold a telco responsible if someone says something harmful on a phone line.”

“I actually think where we should be is somewhere in between,” he said.

Facebook and social media giants including Twitter and Google have come under increasing pressure to better combat governments and political groups using the platforms to spread false and misleading information.

Those teams and Facebook’s automated technology currently suspend more than 1 million fake accounts each day, he said, adding that “the vast majority are detected within minutes of signing up”.

“Our budget is bigger today than the whole revenue of the company when we went public in 2012, when we had a billion users,” he said.

“I’m proud of the results but we will definitely have to stay vigilant.”

On Friday Jewish leaders called for better policing of hate speech on social media platforms over concerns prompted by recent attacks that people on the margins of society are being incited online to violence.

Rabbi Pinchas Goldschmidt, president of the Conference of European Rabbis and chief rabbi of Moscow, said online radicalisation was giving rise not only to more anti-Semitic incidents, but also hate crimes directed at Muslims and others.

“The strength and power given by social media to people on the margins of society is causing chaos,” he said, citing attacks in New Zealand, Germany and the United States.

“Last year, 2019, there were quite a few attacks against houses of worship – mosques, synagogues and churches.”

Goldschmidt said that with legal protections for free speech, it was hard for governments to police hate speech effectively, but that private companies had more flexibility.

“A private company that gives a platform, whether it’s a theatre or a Facebook page, definitely has the ability and the right to limit speech,” he said.

Michel Friedman, a prominent German Jewish leader, said, however, that governments could do more if they made the issue a priority, saying that authorities have been effectively combating online financial crimes.

“If we are able when it’s about the economy to react very quickly on cyber crime, why not hate crime?” he said.

But regulating what can and can’t be said is a thorny issue, said Alex Samos, former chief security officer of Facebook.

“Discussions about what is lawful or not lawful speech are extremely complicated,” he said.

Previous Rhapsody in twilight shows songs still shine
Next Taking it to the streets: Frisbee, lattes in residents’ suburban play