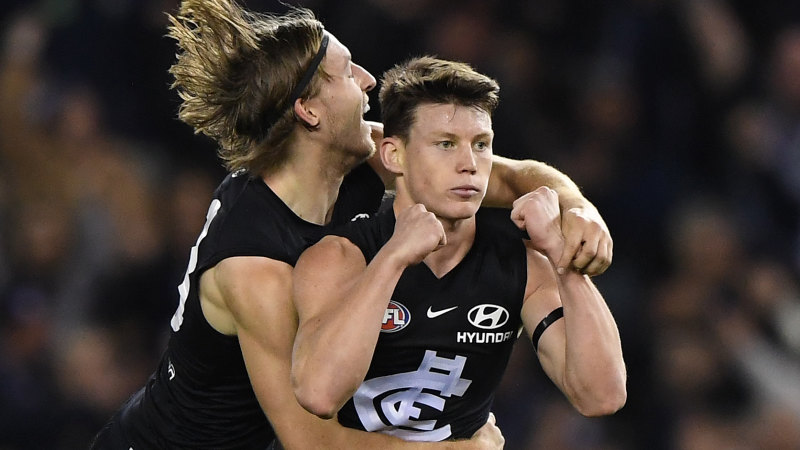 “In order to fast track our on- and off-field leadership, the players and coaches voted to implement an emerging leaders group 12 months ago,” Lloyd said.

“This group, which works closely with our director of high performance Andrew Russell, has been identified as players who have influence within the club, and whom can drive standards and support the leadership group. There is a great mix of ages and experience in the emerging leaders group, which is an internally run program that covers the unique demands of an AFL environment.

“Jacob, Liam and Sam have come through this program with outstanding leadership qualities and will perfectly complement Patrick Cripps, Sam Docherty, Ed Curnow and Marc Murphy in leading our AFL side in 2020.”

While Cripps, 24, and Docherty, 26, could share the top job for several years, Walsh, at only 19, has reinforced why he is seen as a future skipper.

The Blues said Walsh had shown an unwavering intensity at training, constant desire to seek feedback and a hunger to reach his potential.

Former Bulldog Jones was transformed into a defender in 2017, and the 28-year-old has been a key component of the side since.

“Weiters, Jonesy and Walshy are exceptional leaders in everything they do, whether it be on the training track, during games and living the values of our football club – that is why they have earned their place in the leadership group,” Docherty said.

Kade Simpson, the 325-game veteran, opted to step down from the group.

Cripps said it was up to the entire list to help the Blues build on an encouraging end to the 2019 campaign when they won six of their last 11 matches. The Blues hope they can now finally emerge from one of the darkest periods in club history.

“There may be seven in our leadership group but all 45 players are responsible for driving our club forward and earning success,” Cripps said.

“As leaders we have a responsibility to drive the standards, but across the board we’re challenging each other. We know where we want to get to as a football club but it can’t just be on seven of us to drive that, it is going to take all of us.”