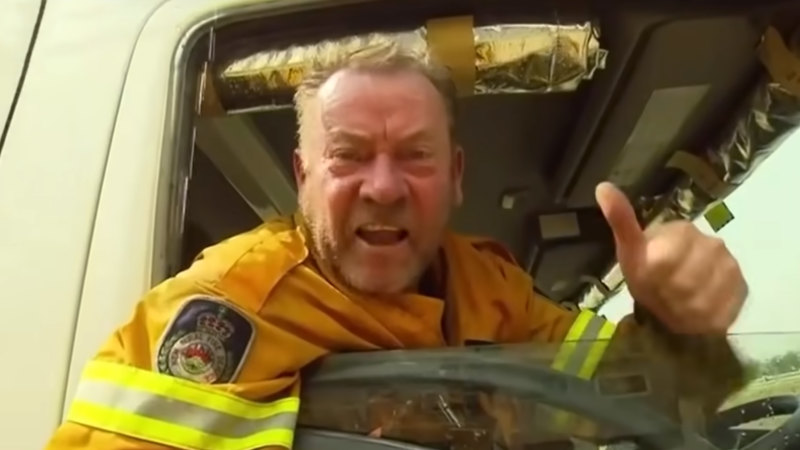 “Are you from the media?” Mr Parker asks in the clip, which was aired on Seven News. “Go and tell the Prime Minister to go and get f—ed from Nelligen.”

He adds, sarcastically: “We really enjoy doing this shit, f—head.”

He said his anger was sparked “because, when Morrison had been asked whether [RFS] volunteers should be paid, he’d said no, because they enjoyed what they did”.

Tweeting on Monday morning, the RFS said Mr Parker’s claim that he had been sacked was false.

“We can confirm Paul remains a member of the NSW RFS and has not been dismissed,” the tweet read.

A spokesperson for the RFS said the organisation was able to confirm Mr Parker was still, formally, a member of the service and had not been dismissed.

However, it was “looking into” what had occurred at a brigade level to determine exactly what communication Mr Parker had received.

Speaking at the launch of a Lifeline service for those affected by the fires on Monday morning, RFS Commissioner Shane Fitzsimmons said “contact has been made or is attempting to be made” with Mr Parker, noting that, although he had not been dismissed, “that doesn’t mean there haven’t been some conversations locally with his volunteer peers”.

Mr Fitzsimmons said there were guidelines for conduct while in the RFS uniform, but he was not aware of any action taken against Mr Parker in relation to them.

The Prime Minister said he was “pleased” to hear Mr Parker had not been formally stood down after his comments.

“I understand Paul was feeling incredibly exhausted, and incredibly drained by those events and he was working his tail off defending his community,” Mr Morrison said, adding that he believed Mr Parker was responding to his comments that RFS firefighters enjoyed volunteering – remarks he said were misreported.

“What I said was they want to be out there defending their communities,” Mr Morrison said.

The Prime Minister was quoted as telling media in December: “The fact is these crews, yes, they’re tired, but they also want to be out there defending their communities. And so we do all we can to rotate the shifts to give them those breaks … in many cases you’ve got to hold them back to make sure they get that rest.”

The RFS has previously said Mr Parker left the RFS due to exhaustion.

“It was for his own welfare that he was asked to take a break [from firefighting],” an RFS spokesperson told Seven News last month, adding the direction was “absolutely not” due to the video.

“Pretty much every day someone comes in and puts their money down, telling us to buy a few beers for that bloke who got stuck into the Prime Minister,” licensee Joel Alvey said.

Mary Ward is Deputy Lifestyle Editor of The Sydney Morning Herald and The Age.

‘Ghost town’ at voting booths while ECQ is bombarded with calls

About 1.8 million people had already voted or made arrangements to do so ahead of …