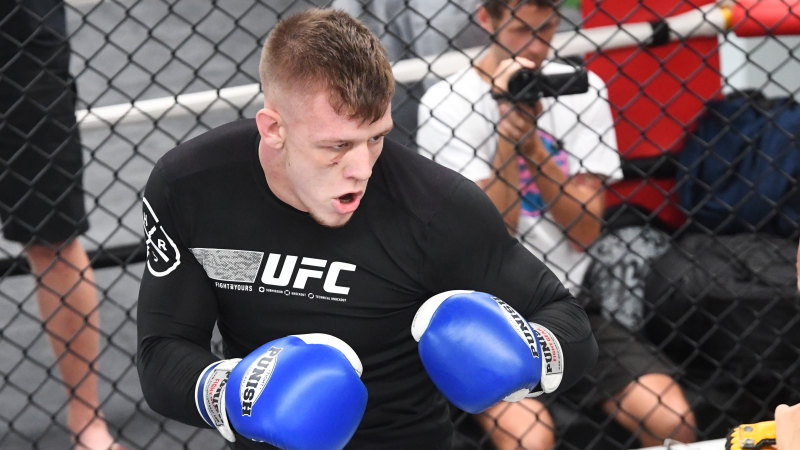 “Right now I am focused on winning fights and I’m focused on getting my win bonus and getting my ring time. If a top 15 spot pops up next time, or the time after, I’ve never said no to an opportunity – you can ask anyone that knows me.

I am free from myself mentally.

“So whoever they put in front of me I’m going to go through and I feel like I’m hitting a really good stride now, I feel like all the hold-ups I had mentally in prior fights – even though I was unbeaten, there was a lot of stuff that hindered me – it’s all gone now, it’s full steam ahead, I am free from myself mentally.”

Crute believes he can break into the top 15 of his division by this time next year, and his journey towards that goal continues on Sunday against Poland’s Michal Oleksiejczuk at UFC Fight Night 168 in Auckland.

“It’s definitely realistic. I beat this guy, I beat the next guy and then I want to smash Misha, I want to get my revenge on Misha Cirkunov and he’ll be sitting in the top 10 probably by then,” Crute said.

“But I’m not looking ahead, I have a job to do, I have to win and it’s been a big change for me – I’ve always just been pretty laid back with it, ‘Oh, win, lose or draw’, nah, I’m going to win this time.”

For the first time in Crute’s career, he will be heading into a fight coming off a loss, and as a result he has made some adjustments in his preparation.

“There’s been a refocus, we really had to have a hard, stone cold look at the way we were doing things and what I was doing,” he said.

“I’ve always gone the extra mile to make sure that I’m going to be successful. It wasn’t even a backstep, it was just a sidestep, to approach things a little bit differently but with the same intensity.

“I just look at him and see a very good hammer but I’m not sure he’s a very good nail. So we’re going to see how well his chin holds up after getting smacked in the mouth and see if he can still bring the same intensity he does when he’s the hammer.”

Crute is one of four fighters representing the Resilience Gym in Footscray on Sunday and if he, Jake Matthews, Callan Potter and Ben Sosoli achieved a clean sweep for the gym, Crute said it would be “the biggest highlight of my life”.

“Getting a win is important but us going four-for-four, man, there is no words to describe the feelings we’re going to feel I’m telling you,” he said.

Ronny Lerner is a Sports reporter for The Age.

Previous Horror Daytona 500 crash sends driver to hospital
Next On-the-go 5G for all your devices, if you can find coverage