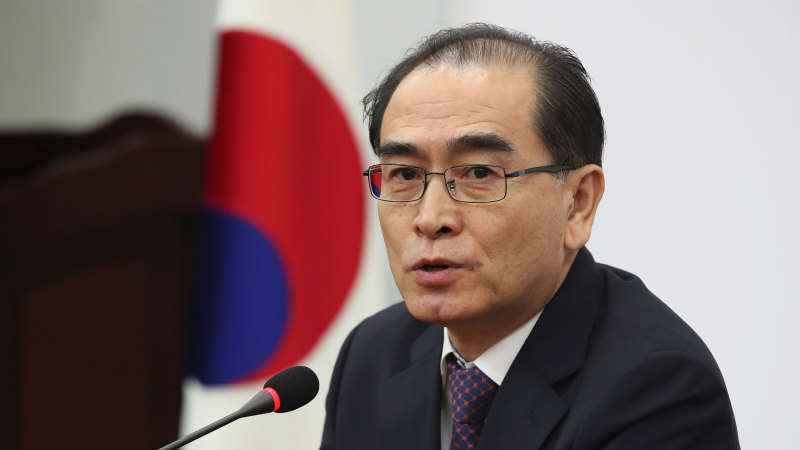 Thae is the first North Korean defector to seek a popularly elected parliamentary seat in the South; another defector sat in Parliament from 2012 to 2016 as an expert nominated by a political party.

On Wednesday, Thae said he had never thought of ​seeking election until the two North Korean fishermen were sent home against their will.

“I could not sleep that night,”​ he said during a news conference.

South Korean navy commandos seized the two North Koreans from their squid-fishing boat in early November after they had repeatedly resisted an order to surrender, according to South Korean officials.

After their capture, the two confessed that they were running from the law after murdering the captain and 15 other crewmen on their boat, South Korean officials said. They also said they wanted to defect to the South. South Korean authorities decided to treat them not as political refugees but as “heinous criminals”.

Blindfolded and tied with ropes, they were escorted to the North Korean border. One collapsed when his blindfold was taken off and he realised that he was about to be handed over to the North, according to South Korean officials and lawmakers familiar with the matter.

Thae compared South Korea’s actions to not rescuing a drowning man because he ​was considered a criminal. The men should have been accepted and then tried under South Korean law, he said.

A government report on the alleged crimes of the two remains classified. But according to officials and lawmakers, the ​ship’s boatswain, identified only by his last name, Woo, was the main instigator, persuading another deck​​hand to join him in killing the captain, who had treated them cruelly, often beating their heads with a food tray.

Eventually, the ship’s chief engineer also joined the killing spree, which started ​late the night of October 30 and continued until early next morning. The killers woke the 15 other crewmen one by one and lured ​them outside, butchering ​them with axes​, hammers and knives​ and dumping their bodies into the sea​. Officials and lawmakers ​briefed on the killings called them “scenes from a horror movie.”

The 15 crewmen killed were first-time seamen, they said.

The three killers then steered their ship back to a North Korean port, hoping to flee inland. But when one of them was caught by the North Korean police, the other two fled to the sea. Their fate in North Korea ​is unknown, but people convicted of serious crimes there​ are often executed​.

Thae pledged that if he were elected, he would try to enact a law to ensure that South Korea ​accepted all North Korean ​asylum-seekers regardless of their criminal backgrounds.

Thae ​​said his candidacy could be eye-opening for members of the North Korean elite working or travelling abroad,​ who might watch his election campaign through ​their smartphones and spread the word to isolated relatives back in the North. It would be a great opportunity to show the North Korean people ​”how democracy works,” he said.