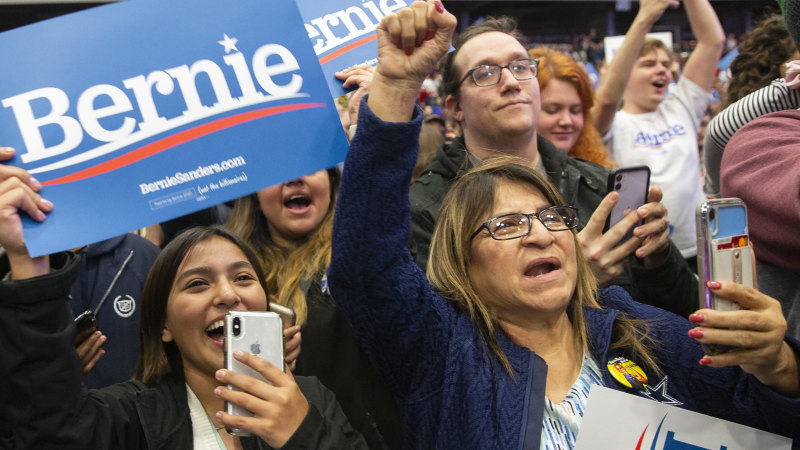 The phrase gained traction last spring, aided in part by a New York Times analysis of polling that suggested a silent (on Twitter) and moderate majority of Democrats. “The outspoken group of Democratic-leaning voters on social media is outnumbered, roughly 2 to 1, by the more moderate, more diverse and less educated group of Democrats who typically don’t post political content online,” the piece concluded from the data.

A few weeks later my colleague Michelle Goldberg smartly observed a similar, very real disconnect. “When it comes to Democratic politics, Twitter is proving a lot less influential,” she wrote. The best example of the phenomenon was former Vice President Joe Biden, who up until Iowa was the Democratic front-runner.

“Spending too much time on the platform can be actively misleading about the state of the party, as you can see in the polling surge of Joe Biden, a man despised by the online left.”

But “Twitter is not real life” has stuck around even as Biden has begun to flail. Last fall New York magazine’s Jonathan Chait lamented progressive Twitter’s distaste for centre-left candidates. This January an article in The Atlantic claimed that Britain’s own elections had been distorted by a “Twitter Primary.”

The “Twitter is not real life” people have a few solid arguments in their favour. As the Times analysis shows, the politically hyper-engaged and more radical tend to share opinions on Twitter. Similarly, Pew Research polling from last year showed that those on Twitter are “younger and more likely to be Democrats than the general public. Most users rarely tweet, but the most prolific 10 per cent create 80 per cent of tweets from adult US users.”

Still, the notion that Twitter isn’t real life is untrue.

There’s the obvious literal sense. Twitter is a real-world platform and is used by very real humans.

Then there’s the notion of tangible impact. Donald Trump’s use of the platform for campaigning and governing and acting as assignment editor to the media is the sterling example, but it goes well beyond that.

Ask a journalist who has been fired for an old, dredged-up tweet or a woman or person of colour who has been doxxed, swatted or harassed and driven from his or her home if Twitter is real life. They’ll say yes.

There’s also something ineffable about Twitter’s influence, especially as it pertains to politics, around movement building and fandoms. Honest, sustained social media momentum behind candidates does seem to translate into something, even if it’s not clear how much to trust it.

Take Andrew Yang. Though his campaign sputtered out last week, he outlasted multiple high-profile governors and senators. His staying power was linked in part to a movement he built across platforms like Twitter.

Establishment pundits and politicos shocked by his longevity might have felt different had they engaged with or even observed #YangGang faithful on Twitter.

A better example might be Senator Bernie Sanders, arguably now the Democratic front-runner.

The Sanders movement has been criticised for its intensity on Twitter, which infrequently but occasionally veers into toxic territory. And while analysts dissect the particulars of the Sanders online movement, what’s unquestionable is that it exists and is a stand-in for something very real: enthusiasm.

As we’ve seen so far in the Democratic primary, enthusiasm matters. The gap between hypothetical polling, months out before the first primary contests and the genuine, fandom-like enthusiasm that might motivate voters to caucus, canvas or brave the cold to cast their ballots can collapse quickly.

Indeed, as New York magazine’s Eric Levitz pointed out last year, while Twitter may not be real life, neither is what shapes most electoral politics.

“Rather, each party’s priorities are shaped primarily by its political elites — which is to say, by its most influential elected officials, activists, donors, policy intellectuals, and interest-group leaders. Such partisan elites have never been representative of their ‘normie’ allies.”

Vox’s Ezra Klein recently put it similarly. “Political elites have an outsized effect on what actually happens in politics, and they’re constantly on Twitter,” he said.

“And they (we!) create a politics that looks more like Twitter even if that’s not what the country wants.”

One way to read my “Twitter is real life” argument, then, is that elites’ opinions aren’t in step with America, but it doesn’t matter because they’re more influential. That Twitter is dominated by political and media elites who have outsize power and that the narratives they write 280 characters at a time dictate our political reality. There’s a slice of that argument that’s true. The conversation that takes place on Twitter often programs the media; that commandeering of broad voter attention sets political agendas and grants certain candidates outsize power.

But the effect on elites is not more influence. Thanks to places like Twitter, I’d argue that the elites’ power to create political narratives and champion specific political movements has waned.

Politicians who build organic online movements and flood the zone with content that’s both proactive and reactive don’t need to woo the media’s or politicos’ attention; they command it at will. Donald Trump and the pro-Trump media have used this to their advantage, while left-leaning politicians like Representative Alexandria Ocasio-Cortez use a similar attention-commandeering tactics (although to different ends).

Mike Bloomberg — a candidate who has yet to appear on the ballot in early primaries — is largely using Twitter to appear like a top-tier contender for the Democratic nomination.

Take the primary process, which is fuelled some by polling, but also by a great deal of punditry. “If you were honest about it, you’d admit that the media itself drove much of this process,” BuzzFeed News’s Ben Smith wrote about the early part of this election cycle.

But, as Mr. Smith notes, that process didn’t stick in 2016. “Trump’s supporters weren’t taking their cues from analysts, or taking much interest in the traditional vetting from the mainstream media.

The more I looked through the “Twitter is not real life conversation” over the past year, the more it became clear that the refrain emanated most frequently from those whose influential status is at risk.

Each “Twitter is not real life” piece seemed to perform extremely well on (uh) Twitter, especially among a kind of centrist political and media elite who bristled at the extreme opinions of far-right and far-left leaning Twitter folk.

“This.,” former Senator Claire McCaskill tweeted with a link to the original Times piece, signalling her approval of its analysis. Ms. McCaskill, a moderate Democrat, recently said on MSNBC that “America is, generally, not as far along the left line as Bernie and Elizabeth [Warren]” despite Senator Sanders’s current front-runner status.

The official Twitter account of “Morning Joe” (a favourite show of Beltway elites that frequently tacks to the centre) also posted the piece, as did scores of legacy political journalists, usually with the some disclaimer suggesting, this might be hard to read but it’s worth it.

The longtime Washington pollster Frank Luntz tweeted the piece numerous times throughout the spring and summer, including before the first set of Democratic debates in June.

“One thing to keep in mind as you see Internet pundits live-scoring Tonight’s #DemDebate: Twitter is not real life,” Mr. Luntz wrote.

Even Pete Buttigieg — currently the leader of the moderate wing of the Democratic candidates — has lamented he “just might get cancelled” on Twitter.

“The one thing I am learning is just how much daylight there is between what has currency on social media and what I’m getting asked about when I’m on the ground,” he said in an interview with the Times editorial board.

“I would not be surprised if it continues to be the case that doing what I view to be the right thing as president is not just politically costly in general but may cost me the hearts and minds of those who are disproportionately represented online.”

Interestingly enough, both the Pete Buttigieg for MA and San Francisco for Pete Buttigieg Twitter accounts tweeted the Times’s analysis piece on Twitter opinion not lining up with broader American political sentiment.

The cries of “Twitter is not real life” become a filter bubble of their own: A way to assuage those who traditionally had great influence over creating political narratives (and who rarely had to compete with dissenting voices) that they are still in touch with the body politic. And that those loud, unfamiliar voices causing all that ruckus aren’t representative of a broader, truer lived experience.

It’s possible, of course, that many things are true at once. As they did about radio or television before Twitter, critics and evangelists opine about new forums for public discourse as either deeply corrosive or utopian.

Twitter’s aspirations as the global town square are utopian, while the day-to-day experience of politics on the platform veer quickly toward corrosion. What’s impossible to ignore, though, is the entrance and elevation of millions of new voices into the daily political conversation. It’s not perfect. But the end product of those new voices — coalescing communities and sustained enthusiasm — is very real.

For politics, Twitter is a living nightmare. It’s overly simplistic, and too prone to flattened discourse and protracted, useless fights. It’s full of in-jokes and cliques and factions and a small number of people who are too loud and too rude. It’s messy as hell with glaring problems that don’t have a whole lot of good fixes.