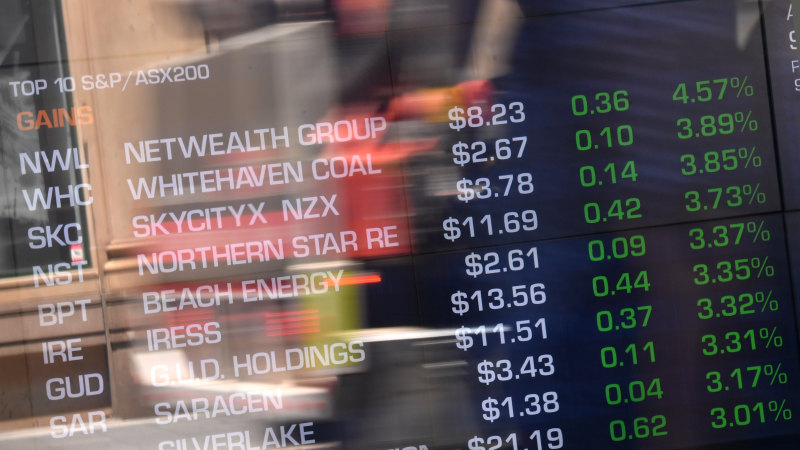 Ardent Leisure, the owner of the Dreamworld theme part on the Gold Coast has suffered a 15 per cent fall in the share price to $1.19 as the Coroner’s report into the October 2016 tragedy is being handed down.

As is being reported live by the Brisbane Times, “Coroner McDougall notes that the 2004 incident review generated a report that recommended engineering controls to stop rafts hitting each other”.

He says those recommendations were not followed through by Dreamworld.

The ASX is still down by 2.2 per cent, the biggest fall in more than two months, while Hong Kong’s Hang Seng index has slid 1.3 per cent on opening and China’s CSI300 is down 0.5 per cent  South Korea’s KOSPI index is down 2.9 per cent in one day.

This sudden rush to avoid risk is due partly to Friday’s weaker US manufacturing data and also news in the past 36 hours about the spread of coronavirus to South Korea, Iran, and Italy.

“Until now, the equity market has dismissed the issue as China-specific, containable and short-term in scope,” says Portfolio Manager at Lucerne Investment Partners, Jerome Lander.

“This is likely to change in short order as a complacent market wakes up to the risk. Investors have superficially considered China to be successfully containing the threat given the official numbers show a decreasing trend of new cases, while global cases have been limited in scope and quite benign outside one exception; the seemingly mismanaged quarantine of the Diamond Princess cruise ship.”  The quarantine has ended and all passengers have dis-embarked, but it’s worth noting Japanese passengers were allowed to travel straight home.

Dr Lander said traders may have been complacent because of a belief that “central banks and policy makers now seemingly control asset prices and seemingly want them kept high”.

“Substantial anecdotal evidence of supply chain issues and collapsing Chinese demand have hence been ignored or dismissed as temporary in scope, in a classic case of cognitive dissonance and wilful neglect,” he says.

“China is obviously one of the two most important economies in the world and any challenge to economic growth there should not be easily dismissed. Market signals from other asset classes such as collapsing bond yields, commodity prices and soaring precious metals have also been ignored, as has excessive positioning and bullishness within equities.”

Oil prices tumbled more than 2 per cent on Monday as investors worried about a hit to demand from the coronavirus outbreak, which is spreading rapidly outside China.

Concerns about the coronavirus grew on Sunday after sharp rises in infections in South Korea, Italy and Iran. South Korea’s government put the country on high alert after the number of infections surged to over 600 with six deaths, while in Italy, officials said a third person infected with the flu-like virus had died, as the number of cases jumped to above 150 from just three before Friday.

“We should not underestimate the economic disruption as a super spreader could trigger a massive drop-in business activity around the globe of proportions the world has never dealt with before,” said Stephen Innes, chief market strategist at AxiCorp.

Gold has jumped more than 1.5 per cent to its highest level in seven years in US dollars as investors rushed to the metal’s safety due to concerns over global economic fallout from the fast-spreading coronavirus.

Meanwhile Gold is at record highs in Australian dollars due to the weakening Aussie, currently trading at $2520.22 per ounce. The price has risen $147 dollars in just one week.

“Markets are once again anxious because the coronavirus outbreak is possibly spreading outside China. There is huge amount of safe-haven demand as economic slowdown in China, Japan and Germany is expected to persist in the first half of the year,” said Edward Moya, a senior market analyst at broker OANDA.

“Expectations are pretty high that central banks will deliver stimulus across the board. That will continue to prop up gold prices.”

BlueScope chief executive Mark Vassella told analysts and investors in an earnings call that the company had four major operating sites in China, and while all of these had resumed operations “operating throughput remains restricted”.

And last August, BlueScope announced a $1 billion expansion of a key steel manufacturing plant in the US, and the company said on Monday morning that work on the project was on schedule.

“We continue to feel very confident about our investment in the expansion of North Star,” Mr Vassella said.

Senior investment advisor at Shaw and Partners, Adam Dawes, says market sentiment in down today because ”everyone is bloody waking up to the fact coronavirus might be worse than they thought”.

The latest situation report has the virus in 28 countries with 17 deaths outside of China, where 2445 people have already died. A further 67 cases were reported in Italy overnight with most of them under investigation.

Futures for US markets are pointing to further falls tonight with the Dow Jones futures down by 1.2 per cent.

“I think everyone is just waking up to the fact that this is going to slow gross domestic product growth by 0.1 per cent quarter on quarter in Australia,” Mr Dawes says this morning.

He added that last week’s comment from Apple, that it will miss revenue guidance because of the slow down in China, will likely be repeated by more tech companies.  Everyone has been ignoring the underlying effects of a global economic powerhouse (China), slowing down, he says.

Card payments darling EML Payments continued its fall to earth on Monday, down 8 per cent to a low of $4.24 and it has now lost more than 23 per cent of its value since reporting last week.

Ausbil Investment Management’s Mason Willoughby-Thomas says the result came in slightly below consensus expectations at the EBITDA level, but said “overall, we would assess the result as having met expectations.”

Mind you any disappointment was due to bite given EML was trading at 25 times consensus 2020-21 earnings before interest, tax, depreciation, and amortisation, according to Ausbil.

But the Twitterverse was highlighting another potential cause for disturbance.

Ownership Matters puts out earnings quality reports on different stocks during reporting season. And it appears that a relatively benign three page report on EML’s results was seized upon by some investors as signalling EML might be having its iSignthis-moment, a reference to a report by Ownership Matters that triggered a drop of $700 million in the market capitalisation of iSignthis, which is still suspended from trading.

The Australian dollar, sensitive to developments in the outbreak because Australia is a major exporter of commodities, fell through $0.66 to touch a fresh 11-year low in early trade.

The New Zealand dollar followed it down. The Singapore dollar, Thai baht and Korean won – all sensitive to China’s economic fortunes – were sold for greenbacks.

After partially recovering last week’s tumble on Friday, it traded flat at 111.55 per dollar as Asian investors discount its safety value owing to Japan’s virus exposure.

“The market reaction to the coronavirus appears to be evolving, beginning to differentiate the currencies vulnerable to the virus from the rest,” Barclays analysts said.

“In fact, our economists forecast no impact on U.S. growth from Covid-19, with relatively few domestic incidents and a low dependency on China’s economy.”

Pakistan and Turkey have closed their borders with Iran to try and contain the spread of the Coronavirus (CoVID-19), as Iran announces a week-long closure of schools and universities.

Meanwhile South Korea has issued the highest alert level possible for the coronavirus with 602 confirmed cases of the virus and six deaths. South Korea’s stock market is down 2.2 per cent today.

And Austria has lifted a temporary travel ban on the Brenner Pass after concerns about two feverish passengers aboard a train from Venice to Munich.

Negative sentiment continues to dominate the stock market this morning with the S&P/ASX 200 slipping below the 7000 points mark for the first time in three weeks. The fall so far is 2 per cent, the worst decline since a fall of 2.3 per cent on December 3, 2019.

The Nikkei is closed today for th Emperor’s Birthday, but South Korea’s KOSPI is down 2.6 per cent. Trading will open on the Hang Seng and Shanghai markets at about 12.15pm our time.

The decline in Reliance Worldwide has extended to a fall of 27.7 per cent to $3.36, the lowest price in six months.