Wallan train crash ‘could have been avoided’: Rail Union 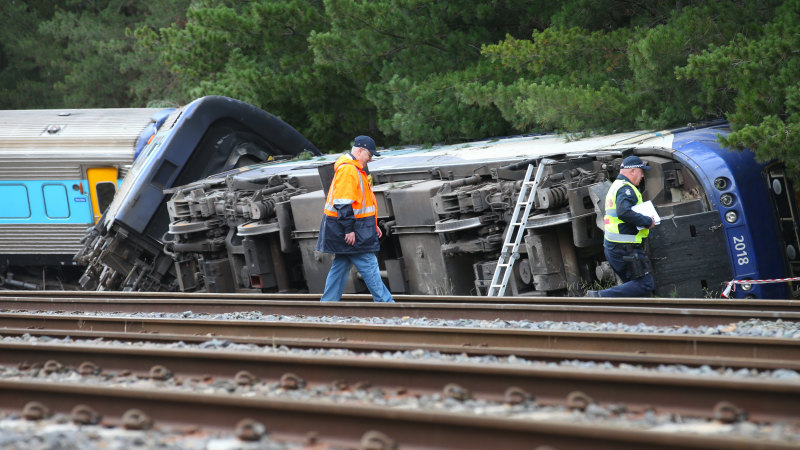 The national rules allowed the train to travel on dangerous track at main line speeds instead of the mandatory 25km/h required under the Victorian rules.

The ARTC changed the route for trains through Wallan from the main line to a passing 15km/hloop line on Thursday. In early February, the Wallan signal box was damaged by fire, extinguishing signals along that section of the rail line which could have warned an oncoming driver to slow down.

The RTBU said the line continued to operate at full speed under a pilot to navigate the XPT through that section of the line. The Victorian rules would have automatically imposed an automatic speed restriction of 25km/h along that section of rail.

A Track Authority notice was issued on Thursday calling for a 15km/h speed restriction on trains entering the passing loop at Wallan where the train came off the tracks at an estimated speed of up to 100 km/h.

The union acknowledged a range of factors including human error could have contributed to the accident, but believes the Victorian rules may have prevented the derailment. The union said the Melbourne to Sydney track had been neglected and was known as “the goat track” because of its poor condition.

A rail insider said that if the train was operating at 25km/h along the Wallan loop line, the worst case scenario would have seen the train “hit the dirt and we would have had a couple of bruises and bumped heads”. “Regardless of the signal fault, the human factors, the weather or whatever, that would have controlled that situation adequately,” the insider said.

The ARTC declined to comment on the union’s claims until it had more time to consider them. An ARTC spokesman said cranes would start removing damaged carriages from the Wallan track on Sunday.

Investigators say they have now completed an on-site probe into the tragedy, with some of the locomotive units and passenger carriages to be removed from the area using heavy machinery, before they are relocated for more damage assessments.

A number of functional carriages will be placed back on the tracks and connected to the locomotive unit at the back of the train, which was undamaged, before being transported by rail.

The Sydney to Melbourne XPT service was carrying 153 passengers at the time it came off the tracks around 500 metres away from the Wallan train station.

John Kennedy, a 54-year-old XPT driver from the ACT, and the train’s pilot, a 49-year-old from Castlemaine, died in Thursday night’s derailment.

Crews have been sent from Sydney to assess whether segments of the train could be reused, such as the diesel locomotive unit at the rear of the XPT which remained on the tracks.

A media spokesperson for Transport NSW said the current level of damage to the train was unknown and, once preliminary assessments are completed, the train will be transported back to NSW.

“The process is going to take a number of days, it does depend on a number of factors … access to the site is quite difficult,” the media spokesman said.

The Australian Transport Safety Bureau (ATSB) have completed “the majority of their on-site evidence collection work” at the site as of Saturday, a media spokesman confirmed.

“The ATSB released the track back to the infrastructure manager, ARTC, on Friday evening, and the rolling stock back to the train owner, Sydney Trains, on Saturday morning,” the ATSB spokesman said.

A V/Line circular sent to drivers on Wednesday stated that trains travelling between Donnybrook and Kilmore East on the North East line connecting Sydney and Melbourne would be diverted through the 15km/h Wallan Loop on Thursday.

Investigators from Melbourne, Sydney and Canberra are still probing whether potential issues with the track infrastructure and signalling problems contributed to the incident, and have obtained the train data logger from the vehicle and maintenance records for the train and tracks.

A preliminary report on the derailment will be released in mid-March, while the final investigation report will be made public in 18 months’ time.

A V/Line spokeswoman said regional train services on the Seymour, Albury and Shepparton lines would remain shuttered indefinitely and it was “too early” to tell when the services would return.

Anna Patty is Workplace Editor for The Sydney Morning Herald. She is a former Education Editor, State Political Reporter and Health Reporter.

LIVE Coronavirus updates: What you can and can’t do in Victoria