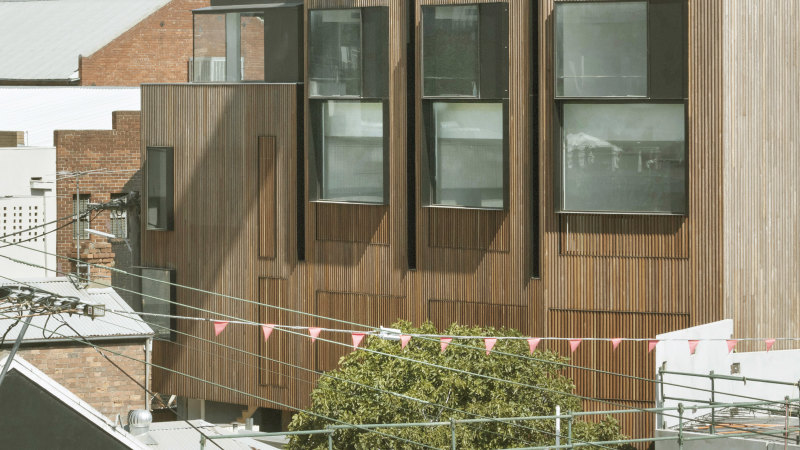 Unlike some architects and designers who start the design process with a building’s envelope and conceive a form, DesignOffice was focused from the outset on how spaces within will be used and experienced.

“There had to be a generosity of space even though each townhouse occupies less than 50 square metres of land,” says Simpson.

As well as the size of the plot came the issue of oversight, with backyards of neighbouring homes bordering the laneway.

The solution was to go vertical, with the five townhouses occupying up to four levels, with a rooftop garden on top and a small courtyard garden at ground level.

To allow for privacy and to eliminate overshadowing, the townhouses step in from the pavement as one moves up the staircases. As important was the expression of the building, using one material to clad the entire exterior.

“When you’re working with such small sites, it makes sense to use a restrained palette of materials,” says Simpson, who used timber battens to shroud the townhouses.

Only the steel frames surrounding windows and other apertures come into the mix.

One of the thoughtful ways DesignOffice also reduced the external accoutrements was to delineate the external steel around windows over three levels, having them appear as large individual picture windows.

Some of these windows are clear, while others, such as those with timber battens framing the bedrooms, include operable windows behind to allow for cross-ventilation.

Inside, such as in the kitchens located on the first floors, the windows are angled and have a bench directly in front to prevent overlooking into neighbours’ back gardens.

“When you start modelling up a scheme, you need to take in not only how residents will use the space, but also the effect on neighbouring homes,” says Mulvihill.

All of the Fitzroy townhouses have off-street car parking, with perforated steel garage doors creating cross ventilation to the courtyard gardens and a sense of connection to either the street or laneway.

However, as there’s a kink in the parcel of land and each plot is marginally different in shape and size, the floor plans in each vary slightly (varying in area from 85 to 120 square metres).

Some of the townhouses, for example, include a ‘pop-out’ room at the top level that leads to a terrace.

Clad in black steel, it’s not dissimilar to a Victorian attic-style room, complete with a dormer window.

However, unlike some of the pokey 19th century attic-style rooms, here there’s generous glazing.

“We designed these spaces as either a second living area, a study/office retreat or even for an adult child or guest staying over,” says Simpson, who didn’t have a perceived audience in mind for these townhouses.

“Most of the uptake has been professional couples who want a place they can stay should they decide to start a family.”

For DesignOffice, which took a holistic approach with these townhouses, designing the exterior and interior spaces including joinery, the objective was to ‘feel at home’.

As a consequence, the materials found here include stainless steel for the benches in the kitchen, and cork for the floors in the kitchen and living areas and on the stair treads.

“It’s soft under foot and reduces the sound as you move to each level,” says Simpson.

Those living here also have the benefit of natural light, views and, importantly, privacy, both with others living in the townhouses and those bordering the property.

One house has become five, but five homes, each one with its own address.