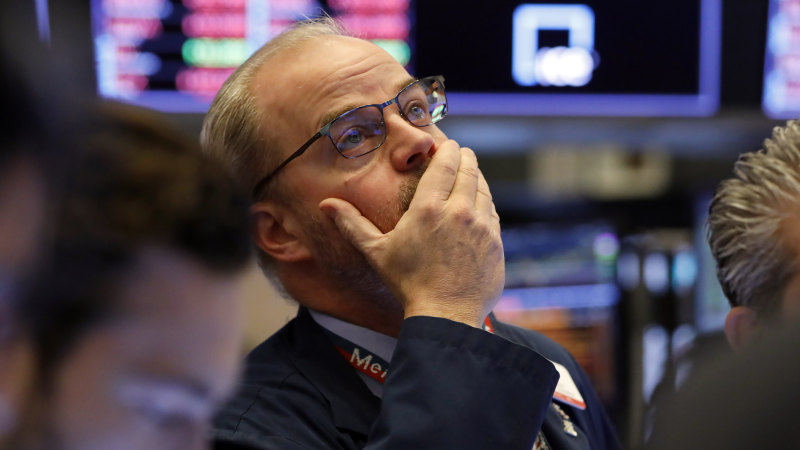 The Dow Jones Industrial Average – which comprises a narrower group of large companies – fell 356.88 points, or 1.39 per cent, and the tech-focussed Nasdaq Composite added 0.89 points, or 0.01 per cent.

The major sell-off is fuelled mostly by worry that measures to contain the virus would hamper corporate profits and economic growth, and fears that the outbreak could get worse. The selling has dragged stock benchmarks around the world into a correction — a drop of 10 per cent or more that is taken as a measure of extreme pessimism — in a matter of days.

The last correction was in late 2018, as a tariff war with China was escalating. Market watchers have said for months that stocks were heavily overpriced and long overdue for another pullback.

The latest losses have wiped out the S&P 500’s gains going back to early October. The benchmark index is still up 4 per cent over the past 12 months, not including dividends.

A potential US outbreak represents a significant test for President Donald Trump, whose presidential success has been deeply tied to the economy and a rising stock market.

The weeklong market sell-off follows months of uncertainty about the spread of the virus. Uncertainty turned into fear as the virus started jumping to places outside of the epicentre and dashed hopes for containment.

“Fear is a stronger emotion than hope,” said Ann Miletti, head of active equity at Wells Fargo Asset Management. “This is what we’re seeing today and this week and over the past seven days.

Federal Reserve officials on Friday began to signal a willingness to cut interest rates if the outbreak worsens, laying out a scenario in which the central bank might respond as infections and quarantines spread globally.

Federal Reserve Chair Jerome Powell issued a statement reaffirming that the central bank will use its tools and “act as appropriate to support the economy.”

While the Fed chair said that the “fundamentals of the US economy remain strong”, he also noted that “the coronavirus poses evolving risks to economic activity” and said that the Fed “is closely monitoring developments and their implications for the economic outlook”.

Powell’s statement came after his fellow officials signalled a willingness to cut interest rates if the coronavirus outbreak worsens, laying out a scenario in which the central bank might respond as infections and quarantines spread globally.

But rate cuts may have a limited effect. They work by stimulating demand, which could help if consumers and investors get spooked and stop spending. But cuts will do little to restart factories and correct supply problems.

China, the site of the first cases and the world’s second-largest economy, has ground to a halt as it struggled to contain the infection. Its factory shutdowns and quarantines have disrupted the global supply chain. Companies like Microsoft have warned that this will affect their sales, and Wall Street analysts have begun to factor those warnings into their expectations for profit growth this year.

“The economic implications of the coronavirus are difficult to ascertain as government and personal reactions to the epidemic are unprecedented,” analysts at Keefe, Bruyette & Woods wrote in a research note to their clients. “We expect that economic conditions will rebound once quarantines are lifted, but there will be a certain amount of activity that will be lost.”

On Friday, the slide in Asia and Europe followed a 4.4 per cent nosedive in the S&P 500 index on Thursday, the worst day for US shares since 2011. In Europe, the FTSE 100 in Britain fell 3 per cent and the DAX in Germany fell 3.4 per cent. In Asia, the Nikkei 225 in Japan closed down 3.7 per cent, the KOSPI in South Korea dropped 3.3 per cent and the Shanghai Composite in China dropped 3.7 per cent.

Oil prices continued a lurching drop, reflecting decreased demand as factories and transportation slow down. Brent crude, the international benchmark, fell as low as $US50.05 ($77.07) a barrel. It was above $US71 in early January. Money has poured into investments like gold and government bonds, which are generally considered safer.

Bond prices soared again as investors sought safety and became more pessimistic about the economy’s prospects. That pushed yields to more record lows. The yield on the 10-year Treasury note fell sharply, to 1.14 per cent from 1.30 per cent late Thursday. That’s a record low, according to TradeWeb. That yield is a benchmark for home mortgages and many other kinds of loans.

Scott Clemons, the chief investment strategist for private banking at Brown Brothers Harriman, said the outbreak’s potential to alter US consumers’ habits was at the heart of the Wall Street sell-off.

“To the degree that consumers change their behaviour – so they stop going out to eat, they don’t take the vacation, they cancel the business trip – that consumption, that spending, personal consumption is 68 per cent of GDP,” Mr Clemons said.

Airlines have suffered some of the worst hits as flight routes are cancelled, along with travel plans. Big names like Apple and Budweiser brewer AB InBev are part of a growing list of companies expecting financial pain from the virus. Dell and athletic-wear company Columbia Sportswear are the latest companies expecting an impact to their bottom lines.

The late 2018 stock market plunge, for instance, derailed holiday sales that year. Now, analysts are worried that the latest stock swoon could cause consumer spending – which makes up some 70 per cent of the economy and has played a huge role in keeping the US expansion going – to contract again.

Professor Mary-Louise McLaws, an epidemiologist who is a member of the World Health Organisation’s COVID-19 …