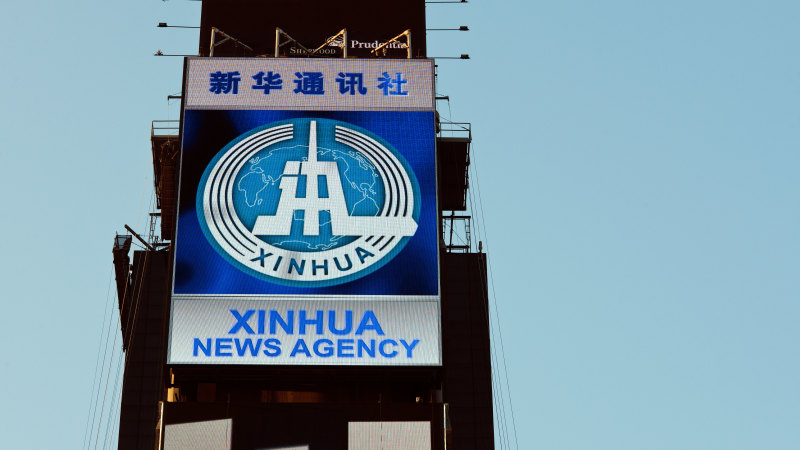 The officials said it was an effort to bring “reciprocity” to the US-China relationship and to encourage the ruling Chinese Communist Party to show a greater commitment to a free press. They noted that only 75 American reporters are known to be working in China.

“As we have done in other areas of the US-China relationship, we seek to establish a long-overdue level playing field,” Secretary of State Mike Pompeo said in a statement.

“It is our hope that this action will spur Beijing to adopt a more fair and reciprocal approach to US and other foreign press in China. We urge the Chinese government to immediately uphold its international commitments to respect freedom of expression, including for members of the press.”

In announcing the move, senior administration officials cited the disappearance of citizen journalists chronicling the outbreak of the coronavirus in Wuhan.

In a report by the Foreign Correspondents’ Club of China, called Control, Halt, Delete, 8 in 10 correspondents said they had encountered interference, harassment or violence while reporting and described the environment for journalists as deteriorating.

“We’re witnessing an assault on free speech inside of China that goes even beyond what it was a decade ago,” said an administration official, speaking on condition of anonymity under administration rules for briefing reporters.

Other officials sought to distinguish the US action from China’s expulsion of nine foreign reporters since 2013, when Xi Jingping ascended to power. The expulsions were usually attributed to the government’s unhappiness with news coverage.

US officials said it will be up to the designated outlets to determine which employees to cut and said there will be no restrictions placed on their content or choice of what to cover.

But they said they are considering imposing duration limits on Chinese nationals working for the outlets, similar to those used by Beijing on foreign correspondents.

The officials pointedly refused to refer to the affected employees as journalists, calling it an insult to free and independent reporters who are not working for “propaganda outlets.”

Though they are not being expelled, many are in the country on I-visas issued to foreign media and may not be able to stay in the country if they lose their jobs.

The caps were imposed proportionately on four of the five designated outlets: Xinhua News Agency at 59, the China Global Television Network at 30, the parent company of the China Daily at nine and China Radio International at two.

The fifth designated outlet, the distributor for the People’s Daily, was not capped, because it has no Chinese citizens working in the United States.

All the outlets employ Americans as well as Chinese, so the caps will not eliminate their ability to cover news in the United States.

Officials said it will be up to the news organisations to determine which Chinese citizens to let go by the March 13 deadline. It is not clear how many will have to leave the country or when, because it depends on the type of visas they have.

The government in Beijing and the four outlets were notified of the restrictions Monday morning.

US officials declined to speculate on how Beijing may respond but said that if they retaliate against foreign reporters in Beijing, “all options are on the table.”

“Our goal is to get to a place where Beijing moves to a more accommodating posture toward journalists, including Americans,” a senior State Department official said.

An administration official said it would be “a shame” if Beijing retaliates against reporters working in China, predicting it could lead to a pullback of investor confidence in the country.

“American news outlets aren’t part of the US government,” the official said. “That’s the beauty of our system. They’re completely independent. It would be a shame if China decided it wanted to take things out on them.”

Every year, hundreds of Chinese citizens are granted visas allowing them to report in the United States, though it was not immediately clear how many are currently working as reporters.

The move against employees of China’s government-controlled media comes amid an escalating series of critical statements by Pompeo about Beijing. He has repeatedly criticised the government’s maltreatment and detention of Muslim Uyghurs, warned US allies of risks associated with technology from the Chinese company Huawei and castigated Beijing’s expanding economic influence in developing countries.

Pompeo has said Beijing is intent on international domination, and during a January visit to London, he called the Chinese Communist Party “the central threat of our times.”

Now, as the world braces for the spreading coronavirus that originated in China, Pompeo has taken the battle to the journalistic arena.