admin March 3, 2020 Victoria News Comments Off on 10th case of coronavirus confirmed in Victoria as Premier warns of pandemic 48 Views 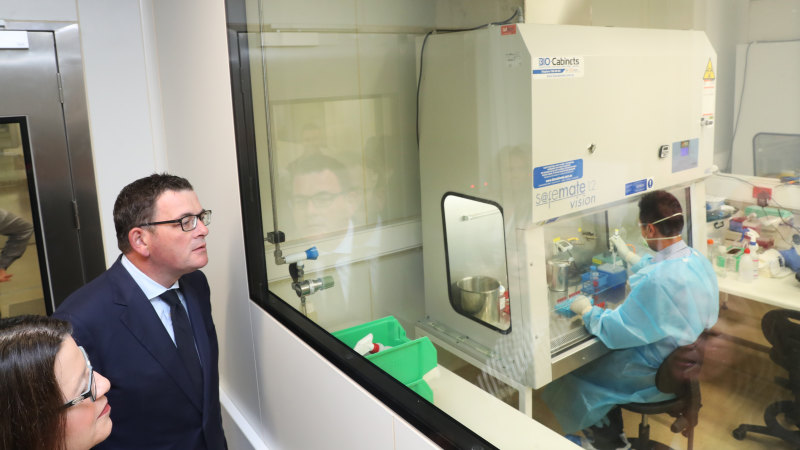 The man is now almost symptom-free and has been isolating himself at home, Health Minister Jenny Mikakos said.

There are now 1700 people in Victoria who have been tested for the virus and returned a negative result.

However, Premier Daniel Andrews has warned coronavirus could reach a pandemic level in Victoria.

“We’re still in the containment phase. It is highly likely that we will get to that pandemic phase at some point,” he said outside Parliament on Wednesday morning.

Mr Andrews said the virus could only be contained “for a certain amount of time”.

According to the World Health Organisation, a pandemic, colloquially, refers to a “new pathogen that spreads easily from person to person across the globe”.

Despite the grim warning, the Premier and Ms Mikakos have called for calm, urging Victorians not to panic-buy as supermarket shelves are stripped of items including toilet paper.

“There is no need for mass panic-buying,” she said.

“There is no harm in preparing should you become unwell at some stage and have some supplies of consumables or medication, but there is no need to have months’ worth of toilet paper,” Ms Mikakos said.

Victoria’s Chief Health Officer Brett Sutton told radio station 3AW on Wednesday stockpiling essential supplies, such as canned or dried food, was a smart idea, but he also called for people to use common sense.

Dr Sutton said he understood the anxiety around coronavirus as Australia was watching “dramatic scenes” of the outbreak unfolding overseas, but consumers emptying shopping shelves and buying months’ worth of groceries in a day was unnecessary.

“Nobody needs to do that because we aren’t suddenly going to be in a situation tomorrow where we suddenly have 100 more cases,” he said.

“People can and should think about [buying] dry goods and other essential items every time they go shopping. We don’t want people to run out of food if they have to be at home for two weeks and don’t have a mechanism to have food delivered. We don’t want them to run out of medicine or run out of pet food.”

Meanwhile, a man who flew into Avalon Airport on Tuesday morning is among hundreds of people who have been tested for coronavirus in Victoria.

Paramedics were called to meet the commercial flight at the airport about 11.30am after he showed signs of being unwell.

If the man tests positive he will be the state’s 11th coronavirus case, as the state government warns there could be delays to elective surgeries once the disease begins to spread more rapidly.

Passengers on a Melbourne-bound flight en route to Tasmania have also reportedly been told to “self-quarantine” for 14 days after sharing the plane with a man who tested positive for coronavirus.

The infected Australian man was on the flight from Iran to Launceston via Melbourne on Saturday.

He travelled on Virgin flight VA-1368, which left Tullamarine airport at 1.10pm. It is unclear whether passengers on the international flight have been asked to “self-isolate”.

The man went grocery shopping at a Woolworths store in Launceston when he was meant to be in self-isolation at home. He went to the supermarket for about 15 minutes on his way home after being tested in hospital.

“The man visited the supermarket after being told of the requirements of self-quarantine,” Public Health Director Mark Veitch told reporters on Wednesday.

“The risk to anyone who was in the supermarket at that time is very low. However, it is appropriate to fully inform staff and customers who were there.”

Authorities confirmed on Wednesday morning that a 50-year-old Sydney woman is the third person to contract coronavirus in Australia without having travelled overseas – a sign the virus has begun spreading in the Australian community.

The woman is an aged care worker at a facility near Macquarie University, in northern Sydney. The case is particularly concerning given the virus appears to be most severe in the elderly.

A 53-year-old Sydney doctor became Australia’s first locally contracted coronavirus case on Monday, having been in direct contact with patients before he became seriously unwell and was treated in ICU. He is now in a stable condition.

A NSW woman also tested positive for the virus earlier this week after contracting it from her brother who had recently visited Iran.

Some Melbourne hospitals have started hiring coronavirus managers on short-term contracts as they assemble dedicated teams to respond to the spread of the disease.

Late last week, Western Health advertised a minimum four-week role for a “COVID-19 taskforce medical officer” to be based at Sunshine Hospital.

The position, which comes “with the potential to extend”, was open to doctors with general medical experience.

Responsibilities include following up on results of potential coronavirus patients, participating in pandemic planning and liaising with staff who have been told to self-isolate at home.

Is it a pandemic?

While the World Health Organisation has already declared COVID-19 a global health emergency, whether or not it is a “pandemic” is another matter.

According to the WHO, a pandemic, colloquially, refers to “a new pathogen that spreads easily from person to person across the globe”.

But since the world’s last pandemic – swine flu in 2009 – the organisation has moved to a different “phasing system” to measure such outbreaks, meaning pandemic is no longer a designation triggering a formal response.

The WHO may use the word, spokesman Tarik Jasarevic says, but it has already put the world on alert in declaring an emergency in January.

As for whether the word “pandemic” fits the current coronavirus outbreak, WHO director-general Tedros Adhanom Ghebreyesus says the window to contain the virus has not yet closed though further investment from countries is still needed to stop it in its tracks.