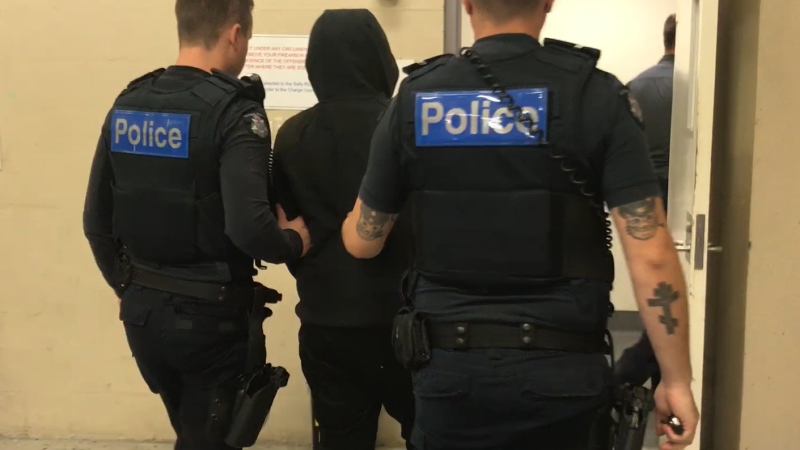 Divisional Commander of the north-west metro region Superintendent David Jones told The Age the team was created to enforce compliance with bail conditions and court orders. It monitors a core group of about 32 of the worst offenders around the clock, including morning and night door-knocks.

In the north-west metro region, which takes in suburbs such as Melton, Caroline Springs, Sunshine and Keilor Downs, police in recent years have been shocked at the escalating violent offending being carried out by young teens, including home invasions, carjackings, armed robberies and “swarming” smash and grab thefts.

“What we’ve seen in the last couple of years is a complete change of the offending life cycle of young where they start off with more minor crimes down here slowly work their way up. We’re seeing first offenders coming in at the carjacking, home invasion, street robbery level. That has been a unique phenomena,” he said.

“As we seen, recently in my area, some of those go all the way up to young victims losing their lives. There’s been a couple in my area just in the last couple of months.”

Aguer Akech, 17, was stabbed to death in St Albans a few days before Christmas last year after a 20-person brawl between groups of teens over a car.

In the same suburb several weeks ago, Iliajah Kuru, 24, was beaten to death with a metal garden pick and fence paling after he allegedly was trying to help a friend get back his stolen phone.

Police believe the make-up of the “street gangs” is fluid, and can be based on geography or ethnicity. However, they lack the structure of traditional gangs such as bikies, with a group perhaps meeting up for only one night to carry out offending before going their separate ways.

Mr Jones said his unit works alongside Taskforce Wayward, which was created in 2017 to work closely with the families of offenders and try to link youths back into school or employment.

It has been a “real change” in the way police in these suburbs are addressing youth offending, said Mr Jones, and has given the ability to better understand how the worst offenders are introduced to violent crime.

“We’re getting a better understanding of the family situation,” he said.

“The gang leaders as we identify them do actively seek to recruit younger family members through peer pressure and sometimes intimidation. We are aware of siblings being brought along and to act as observers before they commit their crimes as well. And obviously, these children are being influenced particularly by their older siblings.

“Parents of the offending cohort will say to me, ‘We need to not let the younger brother get dragged into it because of the sheer pain that it’s been causing the family unit’,” he said.

Mr Jones said police intelligence was showing the new approach was reducing the number of street robberies, which are “the most prolific of all the high harm impact offending”.

“In the last four months, we’ve really had good results and turned around what was otherwise quite a regional spike,” he said.

Despite this, police are still struggling to keep up as the modus operandi of the street gangs changes.

Most recently, they have been grappling with thefts in gymnasiums, where offenders tailgate someone going into a 24-hour gym and steal keys and wallets from change rooms.

“Then, when we were targeting robberies, we saw the offending move into the swarming. And now with the swarming what we’re now seeing is the gym offending. We are also now seeing a lot of alcohol theft occurring as well.”

On Tuesday, the Offender Management Team arrested a 17-year-old boy in relation to multiple breaches of bail.

The most recent crime statistics released by police in December showed aggravated robberies in Victoria hit a 10-year high, thanks to a spike in teenagers mugging people in the streets and stealing from shopping centres.

Previous ‘Never felt this unsafe’: Muslim community pleads for more protection in religious discrimination bill
Next What it’s like having coronavirus: Teen infected on cruise ready to fly home