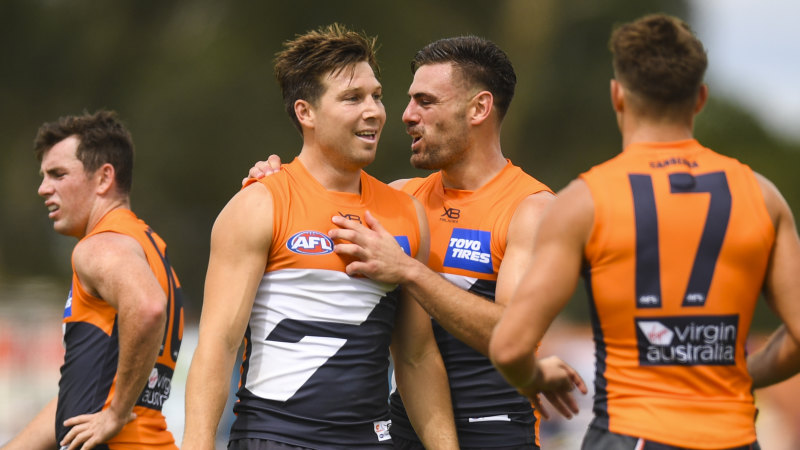 With 29 possessions, Jackson Hately might have put his nose in front for the position vacated by Taranto, who picked up a shoulder injury last weekend .

But prized academy product Tom Green also did his chances no harm with some brilliant moments, collecting 16 touches and kicking a goal while rotating through the midfield.

The immediate focus of coach Leon Cameron, however, might be more directed up forward. The Giants will be anxiously awaiting the charge sheet of AFL match review officer Michael Christian after a potentially troublesome incident early in the second quarter involving Cameron.

The club’s leading goalkicker collected Richmond’s Kane Lambert high with his knees after chasing him towards the boundary and then landing on him. Lambert took no further part in the match due to concussion, and while it looked like accidental contact, it was clumsy and will no doubt be scrutinised.

This was the first time the Giants and Tigers have met since last year’s grand final blowout – not that it would have been on the minds of either team, whose chief aims were to simply tick the necessary boxes in the countdown to round one. The 17.7 (109) to 14.11 (95) scoreboard suggests only the winning team would walk away content, but both sides got what they wanted.

Sunday’s clash was a teaser. The low-stakes nature of the match turned it into a more free-flowing shootout as opposed to the tense arm wrestle that probably awaits in round 7, when the real grand final rematch unfolds at the MCG and the shackles are taken off.

If there was anything to take away from this very entertaining contest, it’s that GWS and Richmond – two teams brimming with elite talent – will be right up there again in 2020.

For the Tigers, the clear highlight came just a few minutes before half-time, when Sydney Stack spent what felt like an eternity hanging on the shoulders of Toby Greene to take a spectacular grab.

Unfortunately for Stack, it won’t qualify for the AFL mark of the year award, but it’s tough to imagine many better will be seen this season.