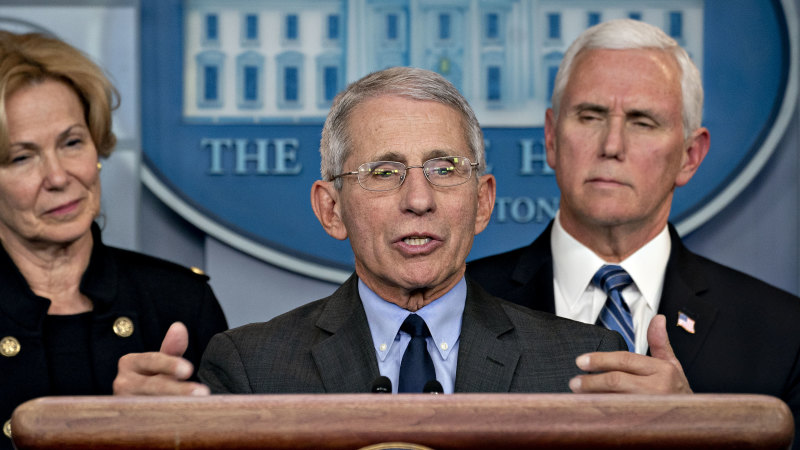 “There is nothing in there that is complicated. It’s just stated in a way that is clear, that people can understand.”

It is believed that Craig Dalton, a public health expert at the University of Newcastle, was the lead author of the paper the US officials were referring to.

The briefing followed a day of carnage on Wall Street, where the US sharemarket recorded its worst day since the 2008 financial crisis.

“We are going to take care of and have been taking care of the American public and the American economy,” Trump said.

“We’re also going to be talking about hourly wage earners getting help so they can be in a position where they’re not ever going to miss a pay cheque.”

He said there would also be targeted relief for the sectors most affected by the outbreak, including the cruise ship and hospitality sectors.

The measures will be announced at a press conference on Tuesday (Wednesday AEDT) after Trump meets with Republican Senate leaders.

Trump departed the latest press briefing without taking questions from reporters, including shouted questions about whether he has been tested for the illness.

Trump shook hands a few days ago with a Republican congressman who has gone into self-isolation after interacting with a man infected with the coronavirus at a recent political conference.

Despite the huge sharemarket declines, Treasury Secretary Steve Mnuchin said: “This is not like the financial crisis.”