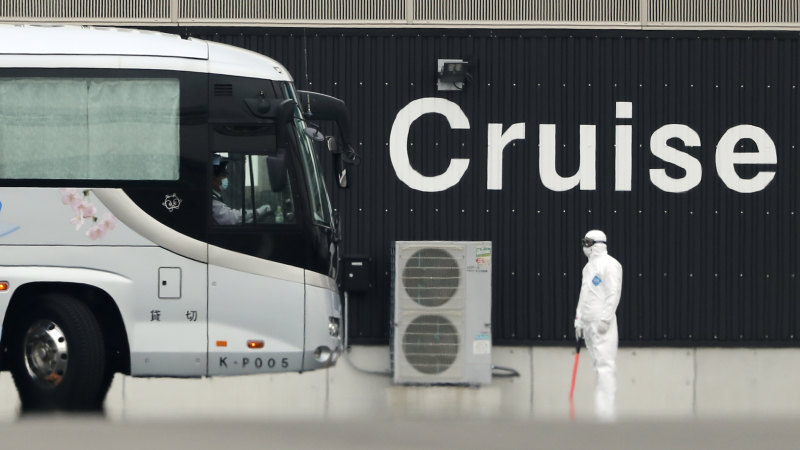 Royal Caribbean’s stock fell as much as 19 per cent on Monday, amid a broad market selloff, but rebounded on Tuesday as US President Donald Trump suggested government help might be coming to the industry. Also Tuesday, S&P Global Ratings said it might cut the cruise company’s credit rating, as well as that of rival Carnival Corp.

Fain’s pain is unlikely to generate much public sympathy. But with tourism accounting for roughly 10 per cent of global gross-domestic product and employment, it’s worth acknowledging. If the world’s economy is to recover quickly from coronavirus, tourism will need to recover, too. COVID-19 is a more serious threat than the other health and safety issues that have plagued cruises over the decades. Turbulence is sure to follow, but cruises – like the rest of the global tourism industry – aren’t sunk.

‘Just don’t get on a cruise ship’

The birth of the cruise industry dates to the 1960s, and so does its image as a floating incubator for human illness. Outbreaks of gastrointestinal illness were linked to (among other issues) bad water, prawn cocktails and living in close quarters with thousands of strangers. Although governments in the US and elsewhere have implemented comprehensive inspection programs that have reduced the occurrence of shigellosis and other diarrhoea-inducing bugs, there’s still no avoiding them. Indeed, just last month, a Princess Cruises ship cut short a 14-day Caribbean trip when hundreds of passengers and crew came down with suspected norovirus.

Meanwhile, outbreaks of respiratory illnesses like the flu (and COVID-19) are common enough on cruise ships that the US Centers for Disease Control and Prevention publishes guidelines on how to manage them. The World Health Organisation has long warned that cruises pose health risks to older passengers – the demographic that happens to be the cruise industry’s prime demographic. On Sunday, a top US health official told elderly Americans, “just don’t get on a cruise ship.”

It doesn’t end there, either. Passengers have been stranded on ships, such as the infamous 2013 “poop cruise” (during which a fire knocked out power and sewage systems), regularly fall off cruise ships, and have even been threatened with violent death and drowning, such as during the Costa Concordia sinking in 2012. Yet, remarkably, none of these incidents, individually or collectively, has managed to stall the industry’s growth over the decades. In fact, it’s been accelerating. Between 2009 and 2019, straight through the depths of the global financial crisis, worldwide passenger numbers increased every year, going from 17.8 million to 30 million.

It ain’t pretty. In fact, to use a technical term I learned in business school, it sucks.

Is COVID-19 the problem that grounds the fun? For now, it doesn’t look good. The Wall Street Journal reports that some Mediterranean cruises are operating with 20 per cent fewer passengers, compared with a year earlier. Meanwhile, the world’s biggest cruise lines have cancelled most Asia-Pacific cruises. It doesn’t help, either, that social media is filled with users reacting to each cruise ship outbreak by asking, “Why would anyone go on a cruise?”

But even with these problems, the cruise industry has plenty of reasons not to worry. First, and perhaps most important, the travelling public has a decades-long record of not caring. “Nothing is permanent,” explained Frank Del Rio, chief executive of Norwegian Cruise Line, in a recent interview. “Customers do have a relatively short memory, thank God.”

Next, long-term demographics favour the travel industry – especially cruises. Cruises have attracted a younger clientele in recent years, but older passengers (in 2018, 51 per cent of passengers were over age 50) with time to sail remain the key, recession-proof industry demographic.

Finally, there is China. Only 10 per cent of its citizens have travelled internationally, and yet the country is already the world’s biggest source of outbound travellers. Cruises have been a direct beneficiary of that growth: Between 2012 and 2016, Chinese passenger counts grew by an average of almost 80 per cent per year. Most of these passengers, like their counterparts elsewhere, won’t be deterred once the pandemic situation resolves. In fact, thanks to the Chinese government’s determination to put the country back to work, Chinese travel bookings are rebounding.

Most of those bookings are likely work-related, but it’s just a matter of time before pent-up demand (intensified by weeks in quarantine) results in new holiday bookings. A recent survey of Chinese travel consumers found that more than half plan to go somewhere within three months of the coronavirus crisis being resolved – and one-quarter within one month. Already smaller boutique cruise lines are reporting that business is holding steady or even growing as cruises are reconfigured into shorter-term voyages targeting travellers in the vicinity of cruise terminals.

As governments and cruise lines manage shipboard coronavirus onto land and out of the news, bookings should rebound across the industry.

That’s good news for a global economy that could badly use some, and a cruise industry that thrives on being remembered as a safe and accessible getaway. Even in the midst of a crisis, the next holiday is just around the corner.

However, in recognition that it could be more than a year before long haul international …