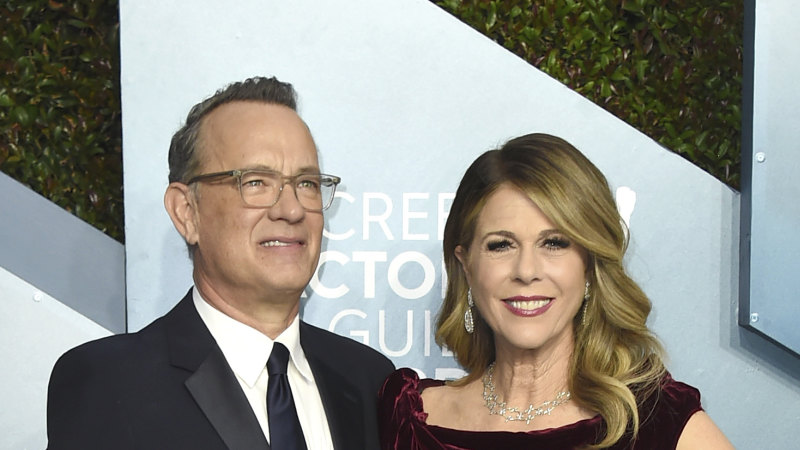 “Well, now. What to do next? The Medical Officials have protocols that must be followed. We Hanks’ [sic] will be tested, observed, and isolated for as long as public health and safety requires.”

Hollywood trade site deadline reports that Warner Bros, the studio making Luhrmann’s Presley biopic in Queensland, has issued a statement on the matter, without naming Hanks.

“We have been made aware that a company member from our Elvis feature film, which is currently in pre-production in The Gold Coast, Australia, has tested positive for COVID-19 (coronavirus),” the studio said.

“We are working closely with the appropriate Australian health agencies to identify and contact anyone who may have come in direct contact with the individual. The health and safety of our company members is always our top priority, and we are taking precautions to protect everyone who works on our productions around the world.

“The individual who tested positive for COVID-19 is currently receiving treatment.”

The implications of Hanks testing positive are potentially huge. It is possible, indeed likely, that the entire production will be forced into shutdown for up to two weeks. That could add significantly to the movie’s already massive cost.

Queensland Premier Annastacia Palaszczuk told Parliament last May the film was expected to employ 900 people from the state across in set construction, catering and costume design roles, while injecting $105 million into the state economy.

The film is still in pre-production, but was due to begin principle photography on Monday. It is scheduled for release in October 2021.

On Thursday, a number of crew members confirmed that all production personnel had been sent home and were awaiting further instructions.

The Presley project is the only production currently underway at the Gold Coast facility.

Speaking in Sydney on Thursday afternoon, Queensland Premier Annastacia Palaszcuk said health authorities were now working with the pair, director Baz Luhrmann and “all the cast and crew” of the production.

She said “those people who have been in … close proximity” with Hanks or Wilson would be expected to self-isolate.

Ms Palaszczuk said she had not met with Hanks and could not confirm if the pair had been isolated together due to “privacy issues”, but assured they would be “getting the best treatment in our hospitals, just as we provide to everybody else.”

“Eight people with the coronavirus were admitted to this hospital and were released,” she said. “We wish them all the very best for a speedy recovery.”

Meanwhile, Wilson’s diagnosis has created its own set of ripple effects in a different sector of the entertainment industry.

In support of her recently released fourth album, Halfway to Home, Wilson performed concerts at the Emporium Hotel in Brisbane on March 5 and at the Sydney Opera House on March 7. At the latter show, she was greeted before the show and after, backstage, by Richard Wilkins, veteran entertainment reporter for Nine (publisher of this masthead).

On Monday, Wilson appeared on Nine’s Today Extra, where she sat at a desk with hosts David Campbell and Belinda Russell and posed afterwards for a photo with the pair. Wilkins also dropped in to say hello.

Campbell on Thursday called in to Deborah Knight’s afternoon radio program on Sydney station 2GB to reveal that in the wake of the contact with Wilson he and Russell would be tested for the virus.

“I interviewed her on Monday… she actually made a joke coming into the studio saying we shouldn’t shake hands, we should bump elbows – so we bumped elbows,” he said.

The meeting took place a few days before Wilson and Hanks returned their positive test results.

“So, now Belinda Russell and I will get tested, we will make sure we’re clear,” said Campbell, who added that he felt “perfectly fine, I feel 100 percent at the moment”.

Nine management, however, is taking no risks, with both Campbell and Russell being sent into self-isolation for at least 14 days.

“Nine today has taken action in line with our crisis response plan around a visit to our studio by Ms Rita Wilson on Monday this week, for an appearance on Today Extra with David Campbell and Belinda Russell,” the broadcaster said in a statement issued on Thursday afternoon.

“Our actions are in line with the guidelines set out by the Government and Health Authorities. Those who were in prolonged contact with Ms Wilson have been tested and are self-isolating for 14 days. Our premises is currently being thoroughly cleaned in all areas she visited and we are encouraging our employees to monitor their health and practise good hygiene.

“Tracy Grimshaw is not hosting ACA [A Current Affair] tonight as a precautionary measure since she had minor surgery last week. Karl Stefanovic will host in her place.

“Arrangements for hosts for Today Extra are still being confirmed.”

Karl Quinn is a senior culture writer at The Age and The Sydney Morning Herald.

Previous ‘I know the difference between a dead kangaroo and a dead human’: Tyrrell inquest told
Next WA confirmed cases of COVID-19 set to rise as clinic test results roll in