‘Nothing will stop me swimming fast’: Chalmers’ focus on Dressel not virus

admin March 13, 2020 Latest News Comments Off on ‘Nothing will stop me swimming fast’: Chalmers’ focus on Dressel not virus 53 Views 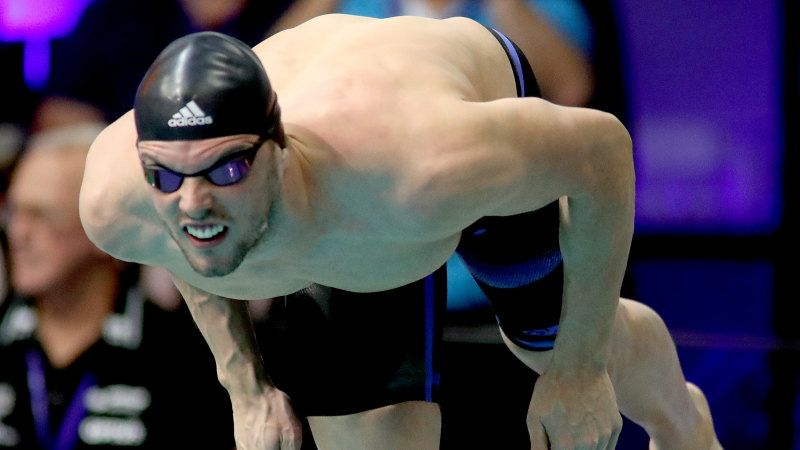 There were notable absentees. Australia’s leading club, St Peters Western of Brisbane, whose stable under coach Dean Boxall includes 400m freestyle world champion Ariarne Titmus and backstroker Mitch Larkin, did not make the trip south for “precautionary” reasons after most of the squad fell ill.

I just look at UFC fighters and know that every time they go into the ring they have no doubt in their mind that they’re going to win.

Boxall insisted “this is not coronavirus” but the pandemic has led Swimming Australia to abandon a training camp at altitude in Arizona, where Dolphins swimmers were due to fly on Sunday, and redirect athletes to Thredbo instead. SA executives were also locked in talks about other upcoming events such as the national age championships next month in Perth, where 1500 young swimmers were due to compete. National coach Jacco Verhaeren said it was “highly unlikely” other would-be Olympians would travel to California in April for the pro-series meet in Mission Viejo as had been planned.

“Four years ago [before the Rio Olympics], we were confronted with the Zika virus,” Verhaeren said. “This seems worse … and has definitively had more of an impact already on the preparations. But we as swimmers and Swimming Australia, we keep preparing as if the Olympics are continuing because every other mindset is not acceptable to prepare for an Olympics.”

That message has been taken on board by Chalmers, who in the thick of a heavy training block swam the 200m butterfly right before the 100m freestyle on Friday. He still stopped the clock at 48.2 seconds in the heat of his pet event. His major concern about the virus is that, as a huge NBA fan, his fantasy team has been put on hold while the competition is suspended. Otherwise his focus is squarely on Dressel, who beat him at last year’s world championships in Gwangju and who stands in the way of defending his Olympic gold medal in Tokyo.

“Four years ago no one was looking at me and I was able to fly under the radar. Now I’m actually enjoying the pressure and enjoying people knowing who I am,” Chalmers said.

“And kind of building up that rivalry with Dressel, it’s been good and it motivates me on a daily basis. I think if I didn’t have that, I probably wouldn’t still be swimming. I think it would have been easy to get to the top as an 18-year-old and kind of think, what’s next? But having that pressure and expectation and the rivalry now, it’s been very beneficial for me.

“You’ve just got to have confidence you can do it. If there’s any doubt in your mind, it’s probably not going to happen for you. I just look at UFC fighters and know that every time they go into the ring, they have no doubt in their mind that they’re going to win. I think a lot of athletes can probably take a leaf out of their book. You’ve just got to back yourself in no matter what.”