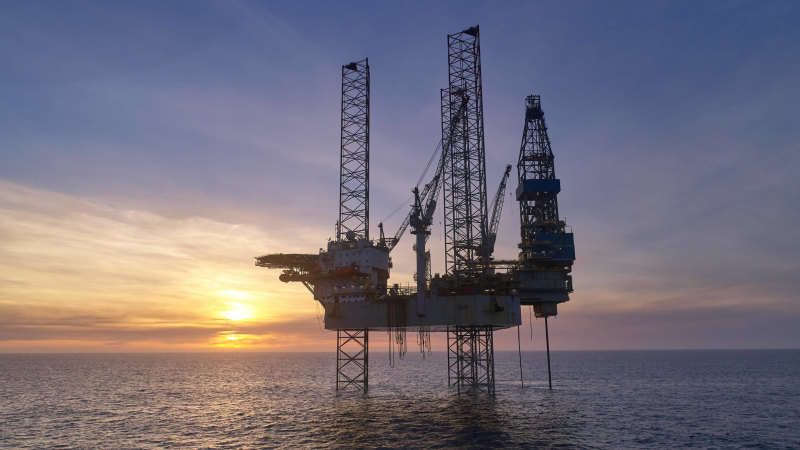 “These are unprecedented circumstances,” said Graeme Bethune of Australian consultancy EnergyQuest. “The dial has moved significantly.”

On Monday, oil prices fell by as much as 30 per cent after Saudi Arabia started an all-out price war with Russia by cutting selling prices and pledging to bring greater oil supply into a market already suffering from falling demand due to the coronavirus pandemic. It was the worst one-day fall since the Gulf War of 1991.

In its biggest-ever intraday decline, Australia’s energy sector lost an alarming $17 billion, or 20 per cent, of its total value as the ASX-listed oil and gas producers took a battering. Since the start of this week, shares in Oil Search have shed 46 per cent, Santos lost 43 per cent and Woodside 34 per cent.

We see Woodside as being in the box seat, benefiting from being between growth phases as oil prices crash, leaving it well placed to weather the current storm.

Investors and industry watchers consider cost-cutting, growth project delays and a pull-back in capital spending across the sector, including on mergers and acquisitions, to be among the probable outcomes as producers try to weather the storm and quell market worries about their profitability.

“Exploration and production companies will turn every stone and cancel every single non-revenue-generating activity,” said Audun Martinsen at Rystad Energy.

As the price of Australia’s booming exports of liquefied natural gas is linked to the global oil price, energy market insiders said the crash could pressure the balance sheets of the nation’s major producers including Santos, Woodside and Oil Search, and imperil the viability of the country’s multibillion-dollar pipeline of future LNG project investments.

“There’s been a lot of activity over the past year … but now we are at risk of a lot of people taking their foot off the pedal just as things were intensifying,” an industry source in Australia said.

“The big LNG players would be looking to kick the can up the road.”

Deferring exploratory drilling and investments in sustainability efforts such as carbon capture and storage programs were “easy cap-ex savings” and could also be put on hold, they said.

Prior to the horror week for oil markets, demand was already withering due to widespread travel lockdowns to contain the deadly coronavirus pandemic, causing a glut in petrol and jet fuel. Things worsened when tensions between Russia and Saudi Arabia, two major oil exporters, came to a head: The Saudi-led Organisation of Petroleum Exporting Countries (OPEC) proposed cutbacks to production as a way to stabilise price falls. Russia refused, and Saudi Arabia retaliated by sparking a price war. By Monday, oil prices crashed and investors fled. The ASX booked its second-worst session in history, shed $126 billion. Almost £125 billion ($248 million) was wiped off the FTSE100, and trading on Wall Street was halted for 15 minutes after the S&P 500 plunged 7 per cent.

“Long-term growth projects under pressure,” Macquarie said, pointing out that some would fail to generate an acceptable return under a spot price scenario and faced the risk of delay unless the oil price recovered.

A Woodside representative told The Age and The Sydney Morning Herald the company was continuing to work with BHP towards a final investment decision on Scarborough in 2020 but said it was prudent to “take stock on emerging uncertainty”.

“We are continuing to work collaboratively with BHP towards a final investment decision in 2020,” she said. “We will be stress-testing Woodside’s financial position for a range of scenarios and will make financially prudent decisions.”

Santos chief Kevin Gallagher said the company’s efforts in driving down costs would prove key to its prosperity amid price volatility. “We cannot control prices in any of our markets, but we can control costs, which is why Santos has focused on developing a disciplined low-cost operating model over the last four years,” Gallagher said.

“We are constantly reviewing our pricing assumptions, however, prices must be viewed over the longer term and through the cycle when making investment decisions.”

The price of the benchmark Brent crude and West Texas Intermediate (WTI) have been cut in half since the start of the year, with WTI sitting around $US33 a barrel and Brent at $US36, as low as they were during the trough of the global financial crisis. Good news, potentially, for petrol and diesel customers, said Dr Bethune, when the drop flows through to the bowsers, but bad news for investment in Australia as a significant oil and gas producer and the world’s No.1 exporter of LNG. The fallout may take months to assess.

According to Adrian Prendergast, of Morgans, the price crash will hit projects in Australia’s oil and gas industry unevenly, depending on factors such as various projects’ fundamentals, how marketable their gas is and the expected investment return. Fortunately for Woodside, the plunge has come during a low capital expenditure period before planned investments at Scarborough and Browse in WA and in Senegal.

“We see Woodside as being in the box seat, benefiting from being between growth phases as oil prices crash, leaving it well placed to weather the current storm,” he said.

On the prospect of mergers and acquisitions, he said, the current volatility in debt markets and oil markets may well dampen appetite. But low prices could conversely have the effect of “stimulating activity” as well.

“Individual asset deals may be harder if sellers have a conceived view on value and buyers would be more hesitant,” he said. “But we see a number of well-resourced players building reserves in current volatility.