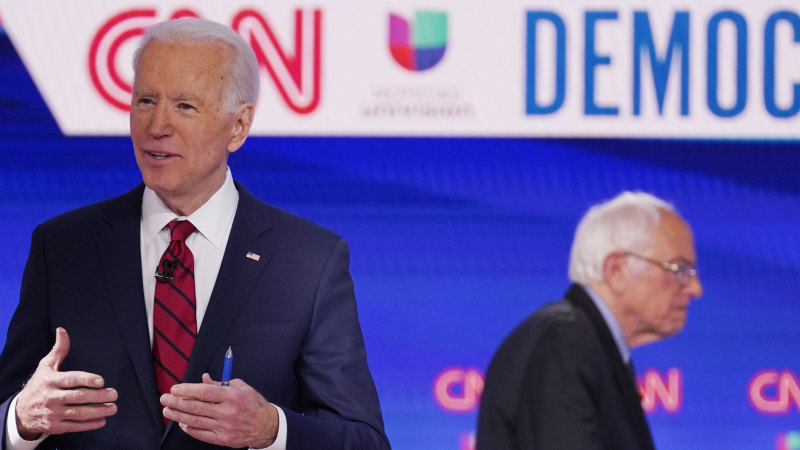 “I commit that I will, in fact, appoint a woman to be vice-president,” Biden said during the debate on Sunday night (Monday AEDT). “There are a number of women qualified to be president tomorrow.”

Asked if he would commit to choosing a woman as his running mate, Sanders said: “In all likelihood, I will.”

It had long been expected that Biden would select a woman, and probably a non-white woman, as his running mate but this was the first time he had made an unequivocal commitment to do so.

Just two women – Democrat Geraldine Ferraro in 1984 and Republican Sarah Palin in 2008 – have been on the ballot as US vice-presidential candidates.

California senator Kamala Harris, who dropped out of the presidential race last year, has attracted the most speculation as Biden’s potential running mate. Harris endorsed Biden last week, and appeared beside him at a campaign event in Michigan.

Biden, 77, has tried to broaden his appeal to progressive Democrats in recent days by adopting Warren’s bankruptcy law reform plan and vowing to make public colleges tuition-free for students whose families make less than $US125,000 ($200,000) a year.

Both candidates vowed to unify the party and campaign for their opponent if they become the nominee.

The latest, and potentially final, Democratic debate was held in the shadow of the coronavirus outbreak.

The debate was shifted from Arizona to Washington, DC, and was held without a live audience, reflecting new restrictions on mass gatherings.

Biden and Sanders were positioned further apart than usual and made a point of elbow bumping before the debate rather than shaking hands.

Just before the debate took place, the Centres for Disease Control and Prevention (CDC) released new recommendations suggesting public gatherings be restricted to fewer than 50 people.

The lengthy debate discussion about the pandemic reflected the candidates’ different campaigning strategies, with Biden burnishing his governing experience and Sanders calling for systemic change.

“People are looking for results,” Biden said. “Not a revolution.”

Asked how he would deal with the crisis, Biden said: “I would call up the military now.

“They have the capacity to provide the surge help that hospitals need and is needed across the nation.”

“It goes without saying that as a nation we have to respond as forcefully as we can to the current crisis,” Sanders said. “But it is not good enough not to be understanding how we got here and where we want to go into the future.”

The next Democratic primaries will be held on Tuesday (Wednesday AEDT) in Florida, Arizona, Illinois and Ohio. It is unclear how they will be affected by the new CDC guidelines on public gatherings.

“Bernie’s notion about how he embraces folks like Cuba and the former Soviet Union and talks about the good things they did in China, it’s contrary to every message we want to send,” Biden said.

Sanders, meanwhile, attacked Biden for voting to authorise the Iraq War in 2002.

“Most people who followed that issue closely understood that the Bush administration was lying through its teeth with regard to Saddam Hussein having weapons of mass destruction,” Sanders said.

Previous Singer Dan Sultan to fight charge of indecent assault at party in 2008
Next From the Archives, 1972: Melbourne blanketed in brown chemical smog