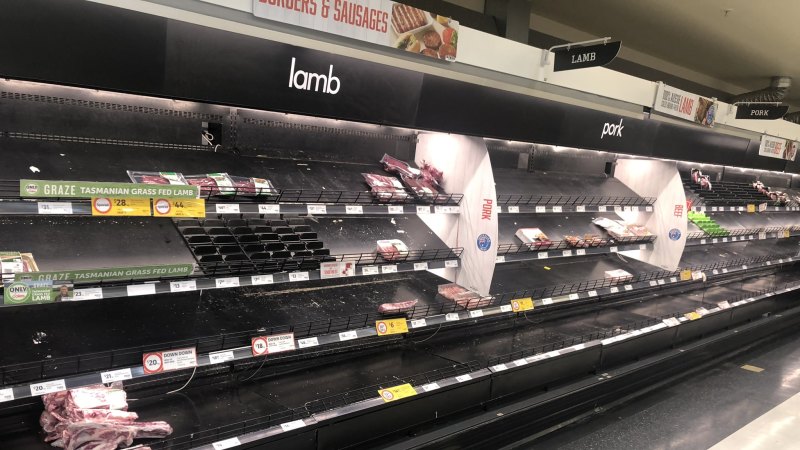 “Coles have put limits on, but they’re still able to clear us out.”

Reverend Clarke, from St Mary’s Anglican Church, said people had been coming to her door asking if she had supplies, but she too had now run out of many essentials.

She was in Kyneton when she spoke to The Age on Tuesday and said two buses had just arrived at the town’s Woolworths.

“I don’t know what they think they’re going to get,” she said.

“(In Woodend) we’re trying our hardest amongst the community to make sure everyone has enough. We’ve got a neighbourhood house where if you’ve got a spare roll of toilet paper you can drop it off. We’ve got community groups popping up.

“But we just need a few days without the Coles tourists to get us back on our feet.”

At the Romsey IGA, about 20 kilometres east of Woodend, it’s been “like Christmas Eve” every day since mass cancellations began on Friday.

Kristi Gilbert, who co-runs a community Facebook page with more than 2000 members, said she had never seen anything like it in 10 years of Romsey life.

She said reports from shop staff was that many people were arriving from Melbourne, but some were also coming from larger regional centres like Bendigo.

Woolworths opened at 7am on Tuesday and admitted only those with pension or disability cards for the next hour. Results were mixed across the city.

In Prahran, more than 100 elderly people lined up before dawn and almost all went straight for the empty toilet paper aisle.

They get us out of bed so early in the morning and the shelves are bare,” Leah, 71, said.

“The three most important things – tissues, toilet paper and meat – and they are not there. I had to buy gyoza. We’re not used to eating gyoza, but now we have to eat anything.

“I woke up at 3am and I didn’t want to go back to sleep in case I slept and missed the toilet paper. But I missed it anyway. It’s hard for us because we’re old. I can’t even walk. I had to take tablets just to be able to get here.”

Coles will begin its dedicated hour for pensioners and people with disabilities on Wednesday morning from 7am.

Victoria’s Department of Health and Human Services said it had distributed a small amount of “care packages” for vulnerable people self-isolating.

People without social contact are advised to call the Victorian government’s coronavirus hotline on 1800 675 398 and indicate what items they require.