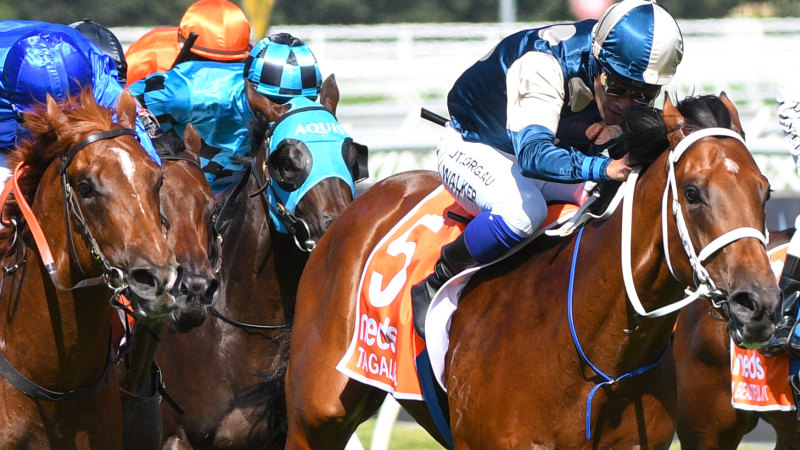 “He has been good enough without them to win a Blue Diamond, and I think he’ll be good enough in a Golden Slipper.”

Tagaloa’s only win in four starts came in the Blue Diamond and he will be looking to do a similar double to what Phelan Ready completed in 2009, when his only two juvenile wins were million-dollar races, the Magic Millions and Golden Slipper.

Farnan went from $5 to $6 after drawing gate 14, despite being a dominant winner of the Silver Slipper and Todman Stakes.

The rest of the favoured runners drew in single-digit barriers. Blue Diamond runner-up Hanseatic will jump from gate nine and is a $6.50 chance, while Dame Giselle, which has won the Golden Gift and Reisling Stakes, tightened in betting from $11 to $9 on drawing barrier four.

However, the draw gave Tagaloa an advantage that Busuttin is determined to use.

“We are going to use the good draw like we did in the Blue Diamond,” Busuttin said. “That was another reason why I didn’t put the blinkers on, because they can jump a little slow with them on for the first time.

“We went back in the Todman and he was as strong as the winner on the line, and we won’t give up our advantage on Saturday.

“He has never had a horse run past him in a race, which is another reason to have him in the first couple of pairs.”

Ciaron Maher and David Eustace, who have had 20 two-year-old wins for the season, will have four runners in the Golden Slipper – Magic Millions winner Away Game, Prague, Cellsabeel and Muntaseera.

“Her feet have continued to improve and she worked like the filly we thought we had a month ago,” Neasham said. “After the barrier draw Cellsabeel [which drew gate 12] and Prague [seven] are my choice of our horses.

“We know they will be able to handle a soft track, and I think they have the right form. I’m surprised there isn’t more talk about Prague after his win [in the Pago Pago Stakes] on Saturday.”

Previous Infant formula and honey not sticking to supermarket shelves
Next April call: Nervous wait for states ahead of India cricket schedule