Breaking News
Home / World News / ‘If he had a fast-ball, it’s gone’: Is Biden sharp enough to be president?

‘If he had a fast-ball, it’s gone’: Is Biden sharp enough to be president? 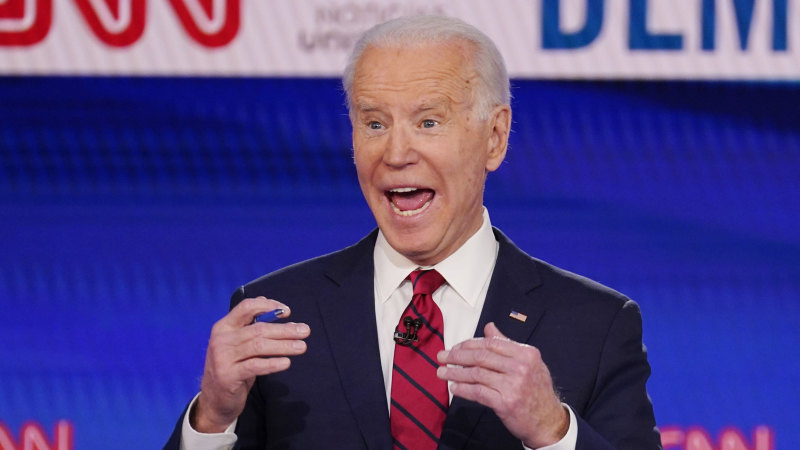 “I said arrested, I meant I was not able to move,” the 77-year-old former vice-president told CNN. “I guess I wasn’t arrested. I was stopped. I wasn’t able to go where I wanted to go.”

“Now here’s an honest-to-goodness true story based loosely on fake events,” comedian John Mulvaney said, playing Biden. “The year was 19-Rikki-Tikki-Tavi. And me and Nelson Mandela were pallin’ around South Africa, Green Book-style.”

At the time of the South Carolina primary, Biden was an underdog in the Democratic race. Now he is the party’s presumptive nominee, having trounced Bernie Sanders in a series of contests. What remains constant are his verbal missteps.

During a one-on-one debate with Democratic rival Bernie Sanders earlier this week, Biden claimed that the Trump administration had declined to buy coronavirus test kits from the World Health Organisation (WHO).

“Look, the World Health Organisation offered the testing kits that they have available and to give it to us now,” he said. “We refused them. We did not want to buy them.”

The WHO quickly denied that there had been any discussions about selling the tests to the US, and that it focused on distributing the tests to developing countries. PolitiFact rated Biden’s claim “mostly false”.

To Biden’s Republican opponents – and even some on the left of the Democratic Party – his stumbles amount to something more than gaffes or even lies. Instead, they regard his slip-ups as evidence of cognitive decline.

During a fundraiser at his Mar-a-Lago resort earlier this month, President Donald Trump ran through a litany of Biden’s verbal stumbles – including his recent claim that 150 million Americans had died because of gun violence since 2007. The real number is around 370,000.

At a recent campaign rally in North Carolina, Trump said that if Biden were elected, he’d soon be put “into a home and other people are going to be running the country”. Last year on Twitter, Trump asked: “Does anybody really believe he is mentally fit to be president? We are ‘playing’ in a very big and complicated world. Joe doesn’t have a clue!”

“If you consider that what he’s displaying gets worse, what’s he going to be like three years from now?” he asked.

Fox News host Sean Hannity recently told his viewers: “Biden is struggling. If he had a fast-ball, it’s gone. If he had a slow pitch that’s gone, too, and his confusing and bumbling speeches, increasing numbers of gaffes and public outbursts are beyond troublesome.”

It was just a preview of the nasty attacks that will come Biden’s way as the November election approaches.

To be clear, there is no diagnostic evidence to support Giuliani’s claim that Biden has dementia. The former vice-president’s supporters point out that he has always been gaffe-prone and long-winded. Biden famously described Barack Obama as “the first mainstream African-American who is articulate and bright and clean and a nice-looking guy”. He dropped out of his first presidential race, in 1988, when he was caught plagiarising speeches by UK Labour leader Neil Kinnock.

The debate about Biden’s mental acuity is also complicated by the fact he has had a life-long struggle with stuttering. During the campaign, he has become increasingly open about his battle to overcome the condition.

But there is no avoiding the fact that if Biden wins the election he will be 78 years old at his inauguration. In that event he would easily become the oldest person to assume the presidency, taking over the title from Trump, who was 70 at the time.

It’s not only Trump loyalists who have wondered about whether Biden has lost a step or two since even a few years ago. Watching Biden’s speeches can be a nerve-wracking experience for those who wish him well.

“Are we afraid to say that a lot of his sentences don’t make sense, that he’s having trouble completing his thoughts?” MSNBC host Joe Scarborough, one of Trump’s most prominent media critics, asked of Biden last year.

Before he dropped out of the Democratic race last year, New Jersey Senator Cory Booker asked whether Biden would be able to “get the ball over the line”.

“There are definitely moments where you listen to Joe Biden and you just wonder,” he said.

Voters in Iowa and New Hampshire, where Biden finished fourth and fifth, openly expressed doubts about Biden’s stamina and whether his time had passed.

But then Bernie Sanders, a 78-year-old democratic socialist, emerged as the favourite to win the nomination. This prompted moderate Democrats to flock behind Biden.

The doubts about him hadn’t been erased, merely suppressed.

The key question is: how much will Biden’s age and verbal stumbles matter to voters in November?

With the nation consumed by the public health and economic ramifications of the coronavirus pandemic, attacks on Biden are getting little traction at the moment.

The virus has allowed Biden to fly under the radar with far less scrutiny than he would expect at this stage of the election cycle.

And Trump has shown it is possible to get away with outlandish statements that would once have been considered career killers.

Trump is certainly a more vigorous and entertaining speaker than Biden, but he can hardly lecture his rival about false statements and gaffes. Just last week Trump sent stockmarkets tumbling when he made several major errors in a pre-written national address.

Much will hinge on how voters perceive Trump’s coronavirus response by November.

Biden has secured the Democratic nomination, in no small part, by being seen as the least bad candidate on offer. If he can pull that trick off again, he will be headed to the White House – gaffes and all.