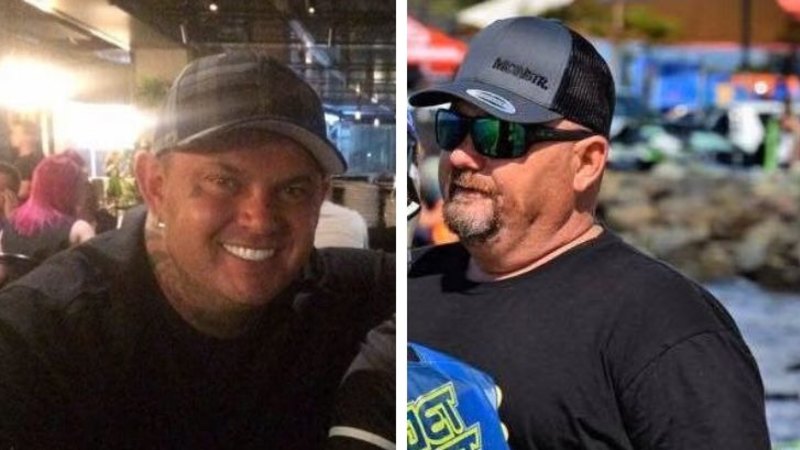 They were both friends with the victims before the Lone Wolf bikies called for a meeting in a Gold Coast park with Mr Ross as the intended target, police said.

“We know there was money owed to other people,” Detective Superintendent Brendan Smith told reporters on Friday.

“We believe that Mr Martin was probably a victim of being in the wrong place at the wrong time.”

The victim’s families were “rocked” to learn the alleged killers were actually family friends, he said.

Mr Ross and Mr Martin were last seen on Friday, October 18, at the Pimpama Tavern before attending a pre-arranged meeting at a Tallebudgera park near the Gold Coast Highway.

Mr Martin was shot in the chest and wounded but managed to drive 1.5 kilometres before crashing into a tree off Tallebudgera Creek Road.

An autopsy later confirmed a gunshot wound as the cause of death.

Mr Ross was reported missing by his family and friends and found in the Tallebudgera park three days after he was shot and killed.

It was a complex and challenging investigation and more charges were expected, Superintendent Smith said.

“It will be alleged the murders were premeditated involving significant planning by the alleged offenders who are senior members of the Lone Wolf OMCG,” he said.

“These were vicious and premeditated crimes we will allege were carried out by an organised crime gang.

“Police will show evidence that they did a dry run around what they were going to do.”

Mr Miller and Mr Singh could not apply for bail due to the seriousness of the charges against them.

Both were remanded in custody for mention on June 18.