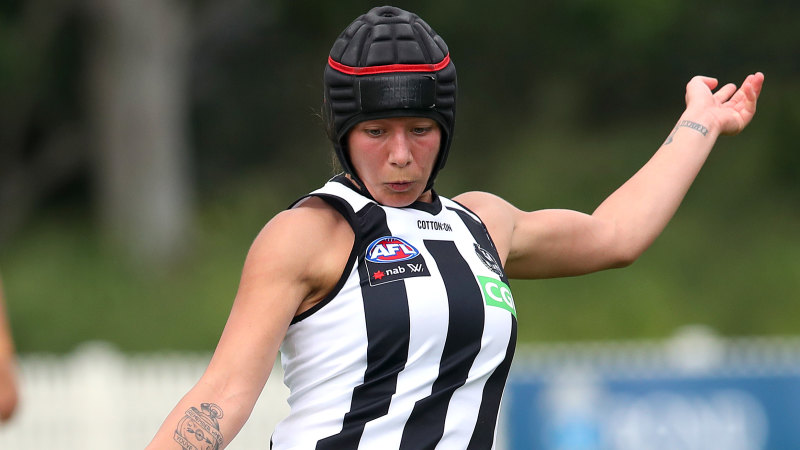 “That first year to two years was me really trying to swallow that pressure,” Bonnici said.

“To be honest sometimes I still am coming to terms with it, especially seeing the boys do so well, it makes us want to too. You realise it’s the whole club in it.

“I felt it more in the first year where we felt we were trying to represent women’s footy and on top of that represent this club that has so much history. In a way I am lucky to experience those years and now I get to reap the rewards a little bit, but I have also been able to handle the fact it is Collingwood I play for.

“When the boys make finals everyone outside the club asks you about it, but we want them to ask about us making finals … I have learnt to embrace it instead of let it intimidate.”

Bonnici admitted the feeling sometimes spread across the group: “It’s something you think about but it’s rarely spoken about.

“But if the conversation comes up everyone is on the same page and saying ‘yeah I have been dealing with that’.”

On Saturday the Pies have nothing to lose. The expedited finals series means there is no second chance for North, who would have got one if there was no coronavirus pandemic as they top conference A. The Kangaroos have looked the team to beat for the whole season.

Magpies coach Steve Symonds has done his homework thoroughly thanks to some pre-planning.

“After last week we weren’t quite sure where things sat [due to coronavirus] so I started scouting three teams because it was uncertain who we’d be playing.

“I started working at having a bit of a look at all of them because it could have gone any way – I scouted North Melbourne, Fremantle and St Kilda if they went ahead with the normal draw.

“We felt our form in the back end of the year, with a reasonably favourable draw, if we kept progressing the way we had, we felt finals was in the equation.

“Everyone could probably look at it with the top team [North Melbourne] favourite for the flag versus a team that some people might perceive as lucky, we go in with a mindset of taking it on and see what happens.”

With Bonnici, Brianna Davey, Chloe Molloy, Steph Chiocci, Sharni Layton and Jaimee Lambert all in good form the Pies can certainly cause an upset.

Symonds remains optimistic about his group’s development no matter what happens on the weekend. “They’ve grown, matured a bit more, so they’ve gotten a year older and played together more. The VFL settled that up too. It’s a combination of things but training has been the major thing.”

Meanwhile Carlton’s Irish player Joanne Doonan will miss the Blues’ elimination final against Brisbane. She has returned home to Ireland because of travel uncertainty due to coronavirus.

On Thursday Melbourne’s Irish duo Sinead Goldrick and Niamh McEvoy did the same, but Collingwood pair Aishling Sheridan and Sarah Rowe chose to stay and play.