AFL round one: Essendon Bombers hang on in thriller leaving Fremantle Dockers to rue missed chances

admin 2 weeks ago Latest News Comments Off on AFL round one: Essendon Bombers hang on in thriller leaving Fremantle Dockers to rue missed chances 16 Views 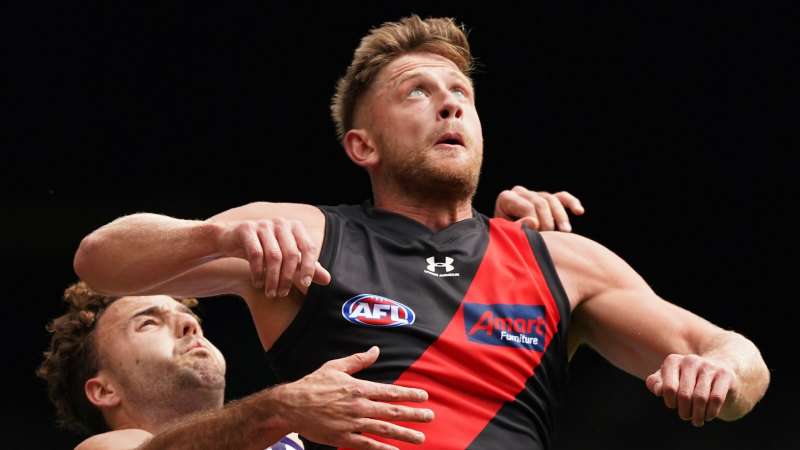 The Richmond premiership player and former Tiger who was playing just his 49th game in his ninth season led the charge with two first quarter goals as he made top 10 pick Griffin Logue on the last line of defence look second rate.

As tough as nature he stood under high balls and crawled towards ground balls giving the Bombers the target they so desperately needed with Joe Daniher, James Stewart and Shaun McKernan sidelined.

To be fair he was also the beneficiary of good ball movement as Bombers midfielders Dylan Shiel and Devon Smith tore their way through the middle and when required, Jake Stringer and Andrew McGrath, used their dazzling feet to open the game up.

To their credit, particularly given the week they had experienced, wearing face masks through airports, and travelling across the country on a chartered flights with anxiety high as the community began to appreciate the full impact of the measures being implemented to slow the spread of COVID-19, the Dockers fought back.

It was their skipper, dual Brownlow medallist Nat Fyfe, which led the charge responding to the threat by inserting himself into the game

The problem was they couldn’t convert and in a game that became increasingly dour and mistake-ridden in the third quarter they missed several goal scoring chances that would have put the Bombers under pressure.

When the Dockers’ top 10 pick Adam Cerra failed to lay a hand on mid-season draft pick Will Snelling and the mature aged recruit wandered into an open goal it appeared the Dockers’ chances were dashed. The goal opened up a 26-point lead for the Bombers and made things difficult for the low-scoring Fremantle.

But they kept coming showing a resolve that had not been evident often enough in recent years with Lobb bobbing up to snap a goal and keep the heat in the game. There was no crowd but you could sense Bomber fans throughout the country becoming nervous about what was unfolding.

When Michael Walters – who is a star – kicked his first goal to bring the margin back to within two goals with six minutes remaining the stadium was silent and Essendon fans at home presumably wondered what they had done to deserve this.

First gamer Sam Sturt took a mark and won a 50-metre penalty after Hurley let frustration get the better of him – and who could blame him – and hit him high as he marked, an incident that will be reviewed.