Dream team of Rawiller and Thompson get group 1 Ryder prize 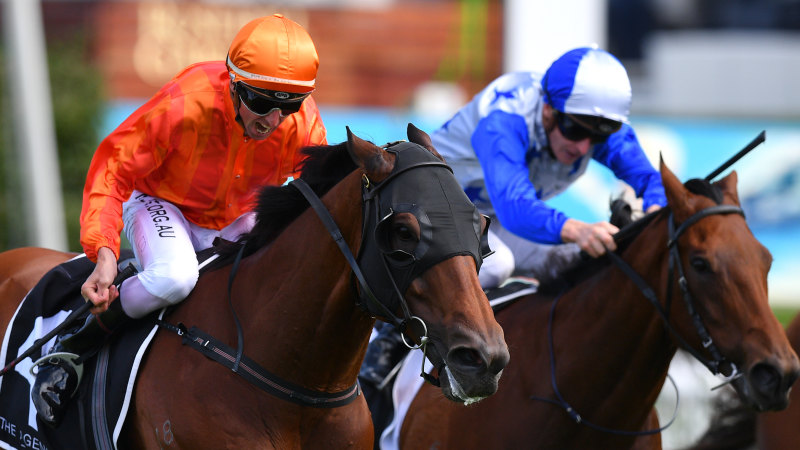 “It is unbelievable to have a jockey like him to work with; he has taken the stable to another level.

“The way he rode him today I was confident a long way out.”

Dreamforce finally got his group 1, 12 months after making his first appearance at the top level when third to Winx in the same race.

It was 17th win for Rawiller and Thompson together this season, and the trainer played a big part in building his jockey back up to his best.

“The association with him since I have been back has been outstanding. He just gives me a lot of confidence,” Rawiller said.

“I can do my own thing and when I get it right he gets on the TV and calls me a genius, which was good when I was starting back.

“He has proven his loyalty to me time and time over. But today I was more proud of the horse.”

Dreamforce struggles to get a strong mile but the Rosehill 1500m prove a perfect match for him. Rawiller got away with a steady tempo early and then was able to make it into a sprint home, running his last 600m in 34.07 seconds.

“I put the pedal to the metal well before straightening. I was sitting well out on the track but then cut the corner then continued out without knowing what happened behind me,” Rawiller said. “I was hoping to throw them into disarray.

“He showed a lovely turn of foot but I really thought at the 100m that I was going to get beat. To his credit he lifted again and fought the other bloke off, which was pretty thrilling.”

It took those back in the field out of the race before the home turn, with only The Bostonian late as a challenger and he got within a head. Favourite Te Akau Shark was trapped wide and simply could make up the ground he gave up early as he was beaten 1¼ lengths.

Super Seth and Happy Clapper never raised their supporters hopes but might be worth forgiving.

“They wen too slow. I thought he went OK and only really got going through the line,” Mark Zahra said of Super Seth.

Tommy Berry will suggest stepping Happy Clapper back up to 2000m and putting him back on the speed.

“When he got between horse he just want to drop the bit. He is that bit older and probably is better in front these days,” he said.

Previous AFL LIVE updates, round one: Crows host Swans at Adelaide Oval
Next AFL round one: Essendon Bombers hang on in thriller leaving Fremantle Dockers to rue missed chances