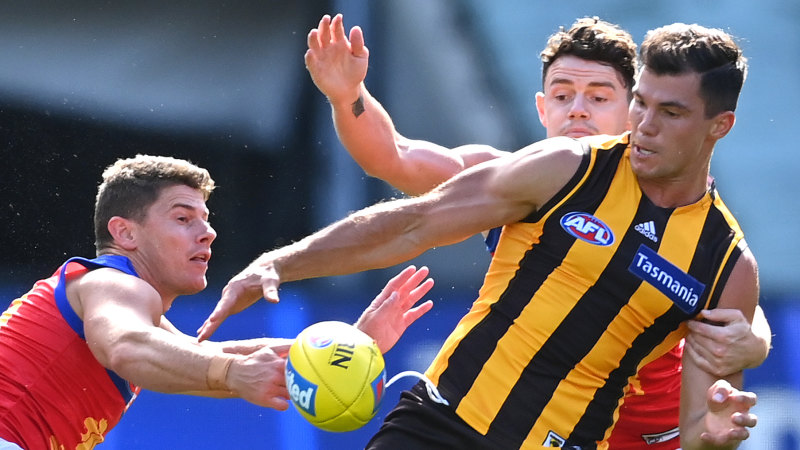 “We will review the situation by the end of April.

“All AFL club training will be suspended … depending on the medical advice and government recommendation the date could be extended out.”

The AFL held an urgent teleconference with club chief executives on Sunday afternoon.

McLachlan also announced that the AFLW season has been cancelled with four teams remaining in the premiership race. No premiership will be awarded.

“The AFL Commission has determined no premiership will be awarded this season [for AFLW],” McLachlan said.

He said the football industry provides livelihoods for thousands of people.

“The AFL industry is facing its biggest financial crisis in our history,” he said.

“To say this is the most serious threat to our game in 100 years is an understatement … it is unprecedented.

“Many people will suffer significant hardship as our people right across out community.

“The AFL plan is to play all remaining 144 games plus finals this year.

“We are prepared to run as late as possible in 2020 to complete the season.

“I never thought it would come to this.

“(It was) unimaginable two weeks ago, three weeks ago let alone a year ago [that this would happen].”

The radical moves on Sunday came after Prime Minister Scott Morrison’s advice against non-essential travel and the announcement of South Australian Premier Steven Marshall that that state’s borders are to be closed.

Asked whether some clubs would battle to remain solvent, McLachlan said: “It’s a challenge but we will get there … we are working collectively to secure liquidity so we can protect the AFL and all our 18 clubs.”

Previous Some schools would go online, and some hand out paper in a shutdown
Next Racing in limbo over ban to non-essential business