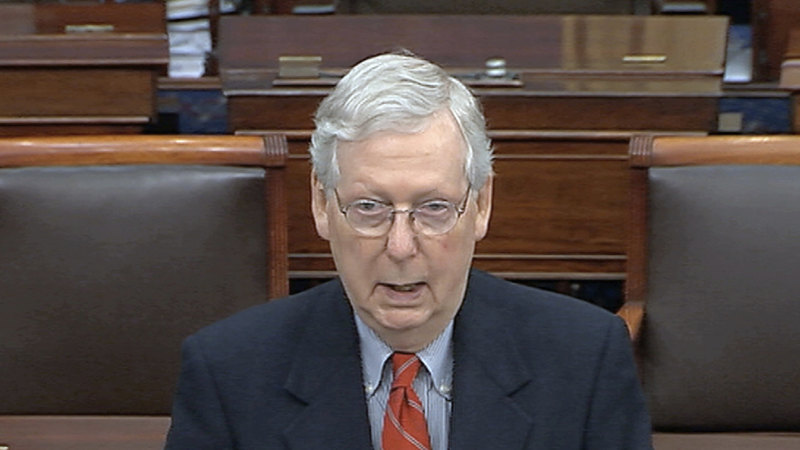 McConnell instructed committee chairmen to assemble draft legislation. Officials put the price tag at nearly $US1.4 trillion and said that with other measures from the Federal Reserve it could pump $US2 trillion into the US economy.

“We are poised to deliver the significant relief that Americans need with the speed that this crisis demands,” McConnell said.

Talks will resume on Sunday morning when the top four congressional leaders of both parties are set to confer privately at the Capitol with Treasury Secretary Steven Mnuchin in hopes of striking a final accord.

A spokesman for Senate Democratic leader Chuck Schumer said there is “not yet an agreement”. Spokesman Justin Goodman said Democrats look forward to reading the draft and further negotiations.

“Everybody’s working hard and they want to get to a solution that’s the right solution, I think we’re very close,” Trump said at Saturday’s briefing, striking a confident tone about the nation’s ability to defeat the pandemic soon.

On Capitol Hill, the Senate convened the rare weekend session as negotiators raced to complete the package. The Senate’s goal is to hold an initial vote on Sunday and win Senate passage on Monday.

The urgency to act is mounting, as jobless claims skyrocket, businesses shutter and the financial markets are set to re-open on Monday eager for signs that Washington can soften the blow of the healthcare crisis and what experts say is a looming recession.

Trump has largely stayed out of the details, but said on Saturday that he would be lobbying the lead negotiators.

On one topic, Trump appears to be agreeing with Democrats as Washington tries to steer clear of the politically toxic bail-outs from the last economic crises.

Trump expressed a clear distaste for any industry, including the airlines, that would use federal assistance to buy back its own stock in an effort to increase profits. Banning stock buy-backs is one of Democrats’ top business priorities in the emerging package.

Treasury Secretary Steven Mnuchin and other top White House officials were on Capitol Hill for a second day of nonstop negotiations. But no announcement was expected.

House Speaker Nancy Pelosi, who has been in talks with Mnuchin, returned to Washington on Saturday and was scheduled to join Sunday’s meeting.

Negotiations are focused on providing direct relief to Americans, with one-time cheques of $US1200, as well as ongoing payroll support and enhanced unemployment benefits for the newly out of work.

Talks are also focused on loans to airlines and other industries blindsided by the crisis, as well as possible aid to the states and billions for hospitals and healthcare providers on the front lines of the outbreak.

The emerging package builds on a GOP proposal but Democrats push for add-ons, including food security aid, small business loans and other measures for workers.

On Saturday, Trump opened the daily virus briefing with a roll call of his administration’s accomplishments, a week-in-review meant to rebut criticism that the White House was moving too slowly to combat the crisis.

The president pushed back against accusations that he was sluggish to act for fear of upsetting China, though he told aides last month that he had not wanted to alienate Beijing by criticising its secretive handling of the initial outbreak.

Trump did not lose his temper, as he did the day before. But mixed, vague messaging still ruled the briefing.

For example, as hospitals across the nation report a dire shortage of supplies to care for an expected surge of patients, Vice-President Mike Pence said the government was completing a half-billion-dollar order for masks. But none of the government officials at the briefing could suggest when the masks would reach medical facilities, a moment of confusion that caused Trump to grow visibly frustrated.

Dr Anthony Fauci, the government’s top infectious disease expert, tried not to over-promise the effectiveness or speed of medication that could possibly be used to treat the virus. After Trump had exited the briefing room, Fauci answered a question about Trump’s tweet about the drugs by saying, “I’m not totally sure what the president was referring to.”

Trump also sowed confusion about his use of the Defence Production Act to force American businesses to manufacture needed medical supplies, saying that while he invoked the act this week, he has not yet needed to utilise it to compel businesses to mobilise, despite the pronounced supply shortage.

Pence announced that, out of an abundance of caution, he and his wife, Karen, would be tested for the virus after a member of the vice president’s staff had tested positive. The result for both was negative, Pence press secretary Katie Miller tweeted on Saturday night.

Pence had said the staffer, who did not have close contact with either the president or vice president, was doing well.

The emerging rescue plan from Congress would be a striking intervention at enormous cost being crafted with a speed unseen since the 2008-09 financial crisis and recession.

It builds on Trump’s request for Congress to “go big.”

A central element is now $US350 billion for small businesses to keep making payroll. Companies with 500 or fewer employees could tap up to $US10 million in forgivable small business loans to keep wages flowing.

That’s on top of a proposal for one-time cheques to all Americans, $US1200 per individual, $US2400 for couples, cut off at higher incomes.

Democrats are pushing for increased eligibility for unemployment insurance for those who jobs are simply disappearing.

For industry, the initial GOP plan called for $US208 billion in loans to airlines and other industries, which would have to be repaid.

Negotiators are still hammering out whether there will be money to the states, whose governors have requested billions, as well as how much will be going to hospitals and healthcare providers.

Trump acknowledged the outbreak was hurting his family’s business of hotels and country clubs but said he did not know whether his business would be one of the many to seek government assistance.

For most people, the new coronavirus causes only mild or moderate symptoms, such as fever and cough. For some, especially older adults and people with existing health problems, it can cause more severe illness, including pneumonia.

The vast majority of people recover from the new virus. According to the World Health Organisation, people with mild illness recover in about two weeks, while those with more severe illness may take three to six weeks to recover.