admin April 3, 2020 Sport Comments Off on Race-by-race tips and preview for day one of The Championships 37 Views 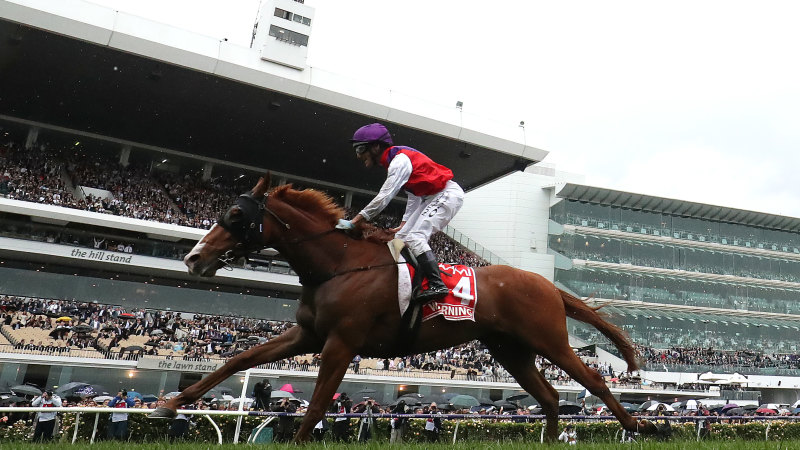 6. Julian Rock was a comfortable winner of his Moruya qualifier with the runner-up 8. Al Mah Haha subsequently franking the form in taking ground off Electric Girl at Kembla Grange. Julian Rock’s form prior to that win was very strong too, scoring a big win at Randwick over 1300m in a BM70 before settling for an unlucky second behind No Escape with Stella Sea Sun in third. The barrier isn’t as daunting once you take the emergencies out which should allow regular rider Jean Van Overmeire to slot in midfield. Loves wet tracks. Looking at the ratings 1. Bobbing is exceptionally well-treated under the set weights conditions. Last year’s Provincial Championships winner is a huge threat but he’s always a low percentage play owing to how one-dimensional he is.
How to play it: Julian Rock to win.

3. Colette brings provincial form but she has been brilliant in winning her last two starts. Two back she relished getting out to a trip at Newcastle, trouncing her rivals. That’s when it all suddenly clicked for her. Would be very surprised if she doesn’t take another giant leap forward here, out to 2000m. The market looks to have this race pretty well cornered with 2. Paradee the biggest threat. Paradee is already a stakes winner and has won three of her past four.
How to play it: Colette to win.

It’s a predictable formula for 3. Gallic Chieftain now, but it works. A couple of runs in Melbourne on firm tracks to get a fitness base before Archie Alexander sends him up to Sydney chasing wet tracks and throws the blinkers back on. This is the seven-year-old’s third preparation for the Ballarat-based trainer. The two previous third-up efforts at Randwick saw him win this race last year before over the spring he just missed in the group1 Metropolitan. History to repeat. Would be surprised if he missed top three. 12. Gayatri is busting to win now third-up but convinced she is better on top of the ground. She’d be on top if we were looking at a good track. There wasn’t much between 1. Mirage Dancer and 5. Carif in the Tancred last start with Carif getting a 3kg swing.
How to play it: Gallic Chieftain each-way.

Only two of the past six winners have run in the Golden Slipper but it’s still an irresistible form line that has me labelling 1. Mamaragan one of the best bets across the meeting. It was only his second start when filling a placing in the Slipper. Sure, he didn’t have to go around a horse but he held down third comfortably. That strength through the line suggests the extra 200m is right up his alley now. Drawn low with Nash Rawiller in the saddle, the son of Wandjina will be making his own luck. 5. Glenfiddich profiles as the best longshot on the back of a gap job at Mornington last start. Love the way 8. Ole Kirk trialled and there’s plenty to like about his tworuns.
How to play it: Mamaragan to win.

3. Warning hasn’t finished any closer than fifth in his three lead-ups but the Victoria Derby winner has been ticking over perfectly with the 2400m in mind. All three races have been run at pedestrian speeds and he doesn’t have the acceleration to go with the sharper horses. That was again evident in the Rosehill Guineas where, on the back of a masterclass from Craig Williams, 1. Castelvecchio dashed too quickly for Warning. Warning, of course, crushed his rivals in the spring out to 2500m, which, significantly, was on a wet track. Would expect Tommy Berry to make sure this is a true staying test. Mahogany in 1994 remains the last dual Derby winner but Ace High came agonisingly close two years ago and Warning is every bit as good as he was. No knock on Castelvecchio but he was a touch flattered by the ride last start and, because of that, is well found.
How to play it: Warning to win

1. Nature Strip is the best sprinter in the country when everything falls into place for him. We were reminded of that in the group 2 Challenge Stakes at Randwick last start albeit over 1000m, but his two prior runs over 1200m were exceptional. One of them was the VRC Classic down the straight where he scorched his rivals while the start before that in The Everest he clocked 55.88s for the first 1000m. It was 33.82s for the first 600m followed by a 33.77s last 600m. That’s serious speed. Drawn barrier 1, and if James McDonald is allowed to build into the race, Nature Strip is going to be near impossible to peg back. 3. Santa Ana Lane couldn’t have done much more first up over 1000m. Santa’s last three second-up runs have seen him break the Randwick track record, smoke his rivals in last year’s TJ and just miss in The Everest behind Yes Yes Yes.
How to play it: Nature Strip to win.

20. Prince Fawaz showed what he is capable of in the Rosehill Guineas last start when pushing Castelvecchio. Prior to that he had loomed as the winner in the Randwick Guineas (running the fastest 400-200) but peaked on his run, finishing 1.5L off the favourite here in 19. Brandenburg. There isn’t as much between them as the market suggests. In 2013, Sacred Falls ran second in the Rosehill Guineas before knocking off Pierro in the Doncaster. With due respect to 1. Melody Belle there are no horses of Pierro’s class here. It should really be $10 the field. The George Ryder has provided five of the past six wins so respect fellow three-year-olds 8. Super Seth and Brandenburg – both draw beautifully – but the strongest reference is via the Ranvet. 18. Nettoyer was beaten a long way but hardly disgraced.
How to play it: Prince Fawaz.

2. Rubisaki only has to hold her form to keep the picket fence intact. The most encouraging aspect is that she continues to improve each time she steps out which suggests she isn’t about to throw up an ‘end of the preparation’ run. Two back she zipped through the wet to win the Inglis Sprint at Warwick Farm before being sent back to Melbourne where she arrogantly won at Flemington over 1400m. Has to drop back to 1200m but the rain affected surface negates that. Should see favourite backers finish on a winning note. If there is a sleeper it’s 7. Heart Of The Oak. Gerald Ryan’s filly beat Positive Peace first up, a mare that has won five straight since. The blinkers go on for the first time and James Innes jnr has ridden her three times for three wins. Just wish she drew a gate.
How to play it: Rubisaki to win.