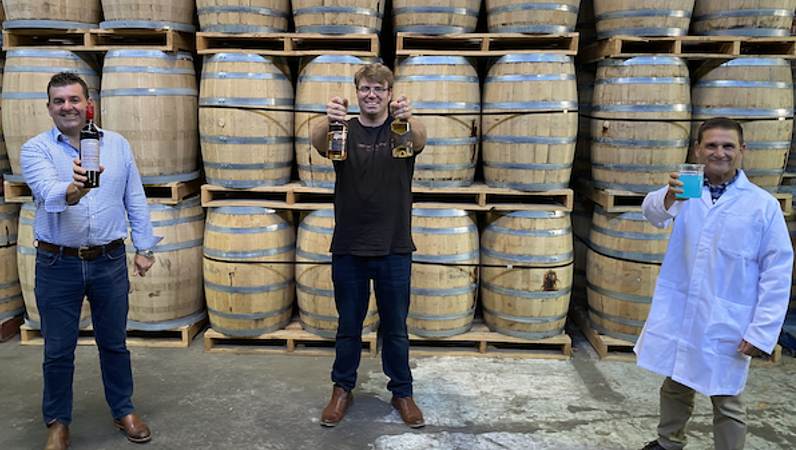 Collie winery Harris River Estate also changed its plans for gin, instead distilling 500 bottles of sanitiser a day and even launching an online shop this week.

Their first batch of 500 bottles was made exclusively for Collie locals after panic buying in the region a fortnight ago but the new online business will help them expand across WA.

“Ferngrove Wine Group is a significant WA producer and we are fortunate enough to be in a position to help, so that’s what we’ve decided to do,” Mr Blythe said.

“Given export markets have come to a standstill, we have the opportunity to supply a large quantity of Semillon and Sauvignon Blanc which was destined for export markets.

“We are not sure when these markets will return so we feel the best thing to do right now is help out the community in this time of crisis.

“It feels really good to be involved in a collaborative project where everyone is in it for the right reasons – to fill an urgent and important gap in the market, to keep WA people employed and to keep a few small businesses running.”

Whipper Snapper co-founder Alasdair Malloch revealed he was about to close his business, which relied on tourism and hospitality, last Monday before the opportunity arose.

“We’ve had to lay off staff and we thought that we’d have to shut the doors. A few days later, we’ve done a complete pivot and have rehired and retrained staff and turned into a 24/7 operation to distil as much ethanol as we can. It’s saved our business,” he said.

Whipper Snapper had also subcontracted Wandering Distillery in O’Connor to help boost production, with 10 litres of wine required to make a litre of ethanol.

Their first batch of industrial hand sanitiser today would go to the Department of Biodiversity, Conservation and Attractions, Transperth trains, the City of Perth, mining companies, aged care providers, schools, retail workers and other businesses.

Molony works in aged care. Until recently, she worked as a clinical first responder for …