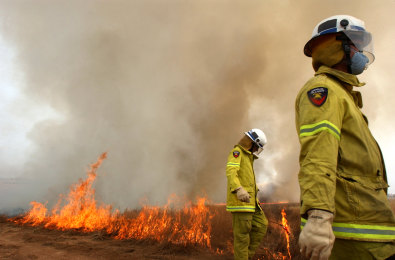 “The experience of recent years that the bushfire season is starting earlier and that the weather window for hazard reduction burning is narrowing. It is therefore critical that, with our partners, we seize the opportunity to deliver the best mitigation efforts we can between now and August, adapting to the COVID-19 situation as needed,” he wrote in the email, obtained by Brisbane Times.

But Assistant Commissioner Bolger warned that new rules would apply to limit physical contact between firefighters and the public, and to improve hygiene during operations.

“It may no longer be possible to conduct door knocks or street meets so we may need to consider letter box drops to inform our communities,” he wrote.

“Only a few weeks ago, most meetings were held face to face, now we are all getting used to meeting via Skype, Microsoft Teams, Zoom and so on. We need to have a similarly flexible approach to achieving the desired outcomes of Operation Cool Burn.”

Volunteers have been told to clean fire trucks before and after operations with soap or alcohol-based cleaners, and avoid sharing equipment such as radios, hand tools and the drip torches used to light fires.

Fire trucks did not need to carry a crew member in every available seat and crews should not move between vehicles unnecessarily, the email said.

New policies also appear to acknowledge that residents are more likely to be at home than during previous operations.

“In terms of burns, we need to pay particular attention to where the smoke may go and be wary of any conditions which may settle plumes over areas with large numbers of people,” Assistant Commissioner Bolger told commanders.

“I urge sharing of ideas to help; however, it is important that, in managing the risk of COVID-19, we do not lose sight of the need to manage the risk of the coming bushfire season to our communities.”

In a statement, QFES said it had “sought and received assurances from Queensland Health that Rural Fire Service brigades can continue to engage in bushfire mitigation activities, including hazard reduction burns”.

“Hazard mitigation is considered an essential service, which means more than two people can gather to perform controlled burns.”

Justin Choveaux, general manager of the Rural Fire Brigades Association of Queensland, which represents volunteer firies, said regional commanders had not had a consistent position on priorities amid the health crisis.

“The reason these emails keep coming out is because the regions have been sending out different messages,” he said.

“There is a state-wide policy but there is a regional interpretation.

“Some said it’s OK to do stack burns (small-scale burning of piles of timber or vegetation) and others said it wasn’t.”

Mr Choveaux said a new command structure implemented a year ago had created a cadre of “cardinals of the QFES church” in charge of the regions.

“None of them have volunteer or rural experience,” he said.

A spokeswoman for the Department of Environment said “all efforts were being made” to implement planned burns in national parks “in accordance with the advice from Queensland Health”.

“DES is working with QFES to continue to support the delivery of operation Cool Burn 2020 and both agencies are committed to implementing planned burns while adhering to health and social distancing advice associated with COVID-19.”

New rules requiring volunteers to obtain Blue Cards, following government legal advice that they could be considered to provide a “health service” to children, have caused a backlash among brigade members and prompted concerns of a drop-off in crew numbers.

QFES said 5500 volunteers still needed to apply for a card, or one in three of the total of 17,400 members.

A QFES spokesperson said volunteers who did not apply would receive a letter at the end of this month warning them they would not be able to work unless they obtained the card.

“Those who decline to apply for a Blue Card will be choosing not to continue in their role and will not be able to respond to incidents. This will not affect QFES’ ability to maintain an effective fire and emergency service response.”

Other Australian states have not applied similar rules. Police and paramedics in Queensland are not required to obtain Blue Cards.