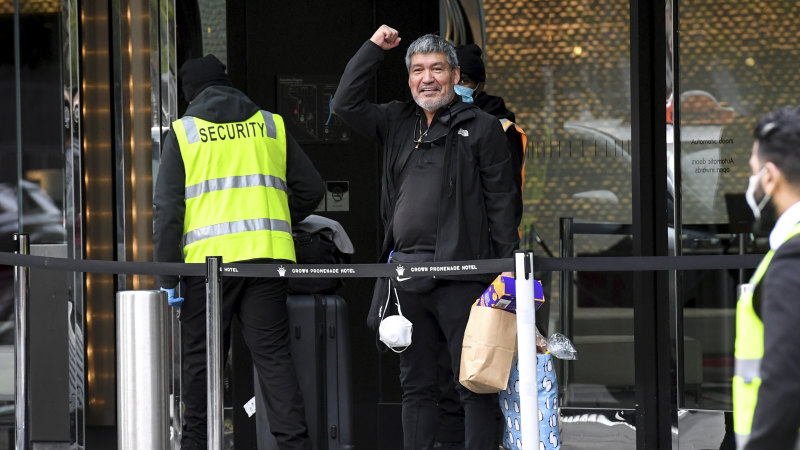 “I’ve had my laptop here, my guitar and books, so there’s been enough to do. It does get a bit difficult towards the end – you’re just pacing up and down the room – but it was manageable,” he said.

Those in mandatory isolation were subjected to regular temperature checks and could not leave their rooms for any reason. Sustenance was delivered in the form of soup, sandwiches, chocolate bars, and cheese and biscuits.

At a press conference on Sunday, Premier Daniel Andrews said the measures designed to curb the spread of the virus were protecting the state’s health system and saving lives, as he announced only three Victorians were diagnosed with coronavirus overnight, bringing the state’s total to 1268.

English teacher Freddi Saleeba will taste freedom sometime after 3pm today, according to a message he received from a taxi company last night.

Set to return to his parent’s Port Melbourne home, he said the quarantine had proved more difficult than he expected, despite being able to work from the hotel room.

“My feelings are a bit mixed (about leaving quarantine), there’s a lot going on. It’s not like I’m going back to normal life, I can’t see people in person anyway, ” Mr Saleeba said.

“I understand why they’re taking these measures though to flatten the curve, so they’re doing something right. But it’s a hard situation.

“I’m looking forward to choosing my own food, going for walks and seeing my family who I live with… being able to take some control over my life again is the biggest thing.”

Health authorities announced on Sunday that a man had died in non-suspicious circumstances while in isolation, with a report to be prepared for the coroner.

The hundreds of travellers set to be released from mandatory isolation on Sunday flew into Melbourne two weeks ago from places like Santiago, Auckland and Doha.

After spending 14 months overseas and living with his girlfriend in Sao Paulo, Mr Cugno was looking forward to “seeing my cat, going for a run and eating a steak” on home soil.

“But when the restrictions lift, I’ll probably go back,” he said.

“Mum was begging me to come home, and she said she’ll buy me tickets to fly back if I got on the last flight home, so I did. It could have just been a bit of emotional blackmail though.”