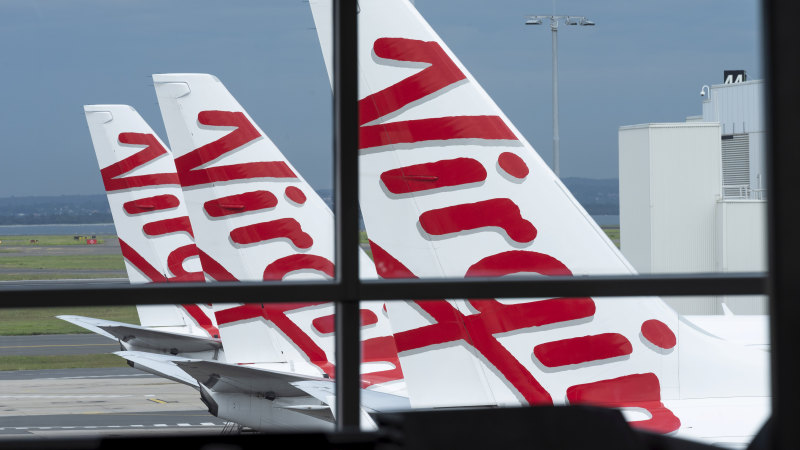 ACTU president Michele O’Neil said the government had to decide whether to use taxpayers’ money to pay workers’ entitlements or use it to save jobs and “potentially acquire an asset for the nation”.

“This is a situation that no one wanted but the reality is stark,” she said.

The union movement and Labor have called on the government to rescue Virgin by taking an equity stake in the airline. Virgin itself has asked for a $1.4 billion loan, which if not paid back after two or three years government could convert to a dominant shareholding.

Asked on Friday whether government would step in, Transport minister Michael McCormack pointed to reports that private equity firms were looking to potentially buy the airline.

“The fact is there is interest there,” he said. “There is a market solution to this and let’s hope it all works out well.”

The deputy prime minister said he was talking to Virgin chief executive Paul Scurrah on an almost “hourly basis”.

“Yes, we’re concerned,” Mr McCormack said. “We want two viable airlines to come out of the situation. I’m confident that we can.”

Prime Minister Scott Morrison meanwhile said this week that he did not want to get in the way of a “market solution”, and also suggested union-backed superannuation funds should bail out Virgin.

Virgin had cut domestic operations to six Sydney to Melbourne flights a week but on Friday restarted a larger network of 64 flights a week as part of a government scheme to underwrite a minimum network of Virgin and Qantas flights worth up to $165 million.

Labor senator Tony Sheldon said on Friday that it was a “disgrace and a fantasy” for the government to to rely on a “corporate raider” to save Virgin for collapse.

Virgin’s chief operating officer Stuart Aggs told a union-led forum on Friday that vital competition would be lost from the aviation industry if Virgin stopped flying.

“After the Ansett collapse, it took 20 years for Virgin to become an effective competitor with Qantas, but even still has only 30 per cent market share,” Mr Aggs said.

“Are we all prepared, is the government prepared, to wait 20 years for that experience to brought back up again from a competitive sense?”

Transport Workers Union national secretary Michael Kaine said the prime minister should explain how he intended keep two airlines in the sky and “how he plans to serve those who really matter in this debt: the thousands of workers who depend on the aviation industry and the travelling public”.

Virgin’s shares are suspended from the ASX while it works on a restructuring and financial assistance deal. Credit ratings agency Moody’s on Friday downgraded Virgin further into “junk” territory with a Caa1 rating. Moody’s said whatever the outcome from here, Virgin’s creditors will likely receive cents in the dollar for what they are owed.