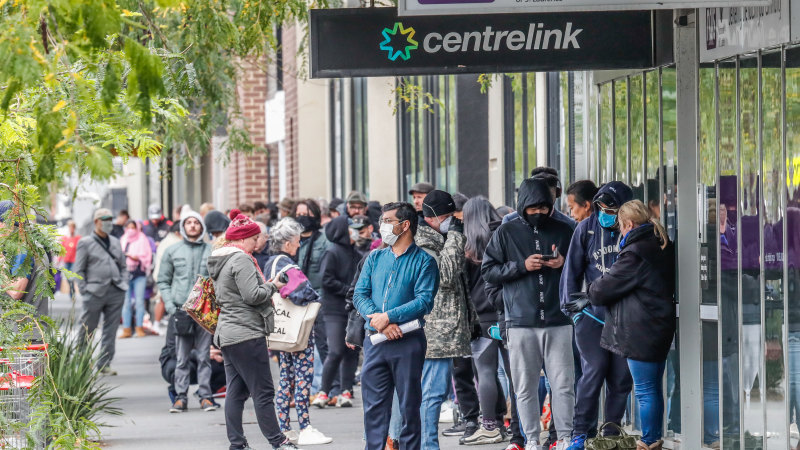 There was some compensation with 12 per cent of the working population – or close to 1.6 million – getting an increase in their hours.

The numbers are at odds with the bureau’s March jobs report which showed unemployment edging up marginally last month to 5.2 per cent. Based on the survey, the jobless rate in April could be well above 7 per cent.

Treasurer Josh Frydenberg said the official unemployment rate was a reflection of the timing of the survey, held in the first fortnight of March, warning there was “no doubt” the jobless level would climb in coming months.

Ratings agency S&P Global on Monday predicted Australia may have to endure higher unemployment for years.

The agency’s Asia-Pacific chief economist, Shaun Roache, said Australia was one of the most exposed countries in the region because of the high debt levels carried by households and the structure of the jobs market.

He said more than 80 per cent of the jobs created in Australia since 2000 were in hospitality, retail or “other services” which heavily relied on household spending.

“Jobs are easily lost but hard to win back. Surging unemployment would mean a shallower recovery and, in some economies, credit stress for leveraged households,” he said.

The threat posed by lower household spending was also evident in figures from the ANZ which tracked spending through its debit and credit card network and found expenditure in the past week was at its lowest annual rate since the bushfire season.

In the early weeks of the pandemic crisis, Australians went on a supermarket spending binge as they hoarded toilet paper, canned tomatoes and pasta.

But ANZ economists Adelaide Timbrell and David Plank said even this was now returning to much more normal levels.

“This suggests that some households are working through their stockpiles as the risk of COVID-19 quarantines abate, while others are going back to more normal levels of spending on essentials, while tightening discretionary spend,” they said.

“Brace for worse – this is just the beginning of the spending decline.”