Patrikios not resting on laurels after AFLPA award

admin April 20, 2020 AFL Comments Off on Patrikios not resting on laurels after AFLPA award 25 Views 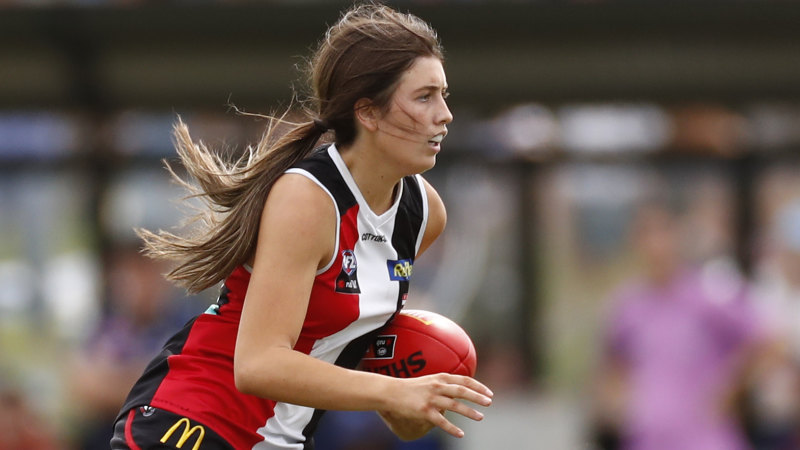 “The belief and faith from [Saints coach] Peta [Searle] to put me on the ball as much as possible and give me that exposure to the best in the competition helped me grow at a lot quicker rate.”

In a season of learning and development for the first-year Saints team, Patrikios said she didn’t expect she would be in the race for any awards and took her enjoyment from watching her side evolve and their maiden win over Melbourne.

“As each game went I got a bit more confident with not only how I play but with my teammates,” Patrikios said.

“I knew I was building but I didn’t think I was in the top bunch. To be recognised is really amazing.

“We bonded really well. As a new team coming in a lot of us girls came from different states and different clubs.

“To come together like we did and win against Melbourne was pretty special. We had a really tight-knit group so that’s one of the reasons we started performing.”

Like so many others who work in sport, Patrikios has been stood down from her off-field work with the Saints until next month but she has picked up a couple of shifts working with her mum at a biscuit company.

With the COVID-19 pandemic stopping organised sport around the country indefinitely, Patrikios is determined to use her long off-season to develop her fitness and her strength.

She marvelled at the fitness and power of senior stars like Karen Paxman and Daisy Pearce. Now she wants to take her game up to their level.

“I need to get stronger in the body as I’m a lot smaller than some of the ladies who have been in the system a lot longer,” Patrikios said.

“The Saints have given us some gym equipment to bring home and make a home gym. I’m thankful for it as it gives me something to do at home.

“I’m also going down to the park and running with my brother. That’s pretty much all I’ve been doing, plus a bit of work here and there. I’m still putting in the hard efforts.”

Patrikios was also named on the wing in the AFLPA’s best 22 under-22 side.

Previous AFL concedes crowds unlikely for rest of the year as Sutton calls for ‘national proposal’
Next ‘Crossed the Rubicon’: Bolsonaro attends protest for military intervention