Race-by-race tips and preview for Scone on Tuesday

admin April 20, 2020 Sport Comments Off on Race-by-race tips and preview for Scone on Tuesday 27 Views 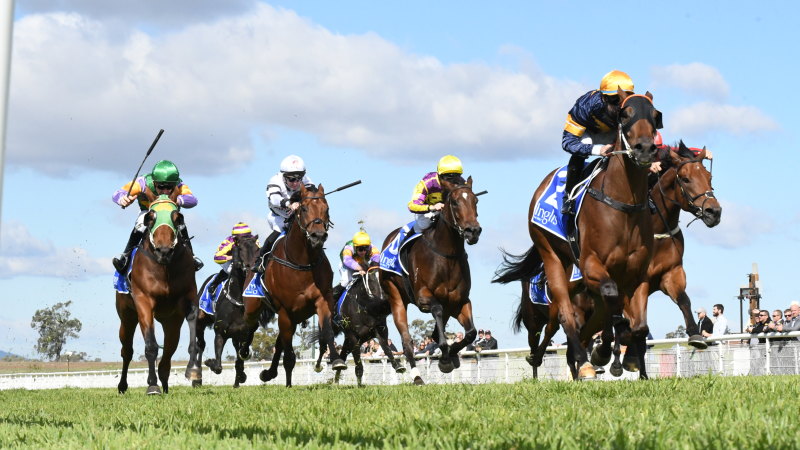 Still with the maidens over more ground, and well-named four-year-old local debutant gelding 2. Lope De Broker (Lope De Vega x The Dow Jones by King’s Chapel) from the Cameron Crockett yard looks a nice one in the making. Has been given plenty of time and stretched out impressively cruising home in a dominant trial win here. Starts in blinkers.
Dangers: Promising local three-year-old filly 6. Mother’s Day hit the line hard resuming despite not being fully wound up, and draws even better. Could have easily have won both runs last spring to start her career with a little more luck. Be surprised if anything else wins, but another three-year-old home-track gelding 4. Warrah Flash is knocking on the door well into first full prep, and draws to get a good trail. Ridden just off the speed back in trip here last start, and hit the line well. Gosford four-year-old 1. Little Rocket Man can improve sharply second-up on firmer ground.

How to play it: Lope De Broker to win and quinella 2 and 6.
Odds and Evens: Evens a special.

Open and competitive battle for the maidens at set weights. Keen on progressive three-year-old gelding 15. Rizzuto, from the Kim Waugh stable at Wyong, who finished hard resuming in a handy maiden this track. That was her first run in six months, and from good “cover” draw, this looks an ideal second-up journey.
Dangers: Four-year-old Randwick gelding 1. All Things hasn’t raced since the spring of 2018, but looks forward enough off two trials, and is by dual Cox Plate winner So You Think. On debut exactly two years ago charged home from well back at Kembla over this distance to miss by a head. Newcastle gelding 4. The Premier stuck on well resuming here over this trip, but has a tough draw. Three-year-old home-track filly 10. Ellia flew home on debut in a weaker maiden at Narromine, but the winner ran another big race at odds on Orange Cup day. Include in exotics home-track filly 9. Charlton Park who has battled from wide gates in her last two, but draws better here, and suited back on top of the ground.
How to play it: Rizzuto each-way.
Odds and Evens: Odds.

Always a good battle of strength and tactics over the mile here, and there are plenty of chances headed by five-year-old mare 4. Tigeen from the Newcastle yard of Kris Lees fourth-up, and first run on this track. Hit the line hard in two runs this grade, before ridden closer at Hawkesbury and didn’t finish off. Much more effective ridden off the speed, and return to firmer ground is a plus.
Dangers: Smart stablemate filly 10. Predictable Miss was stiff not win to win here this grade last start. Hard fit, and just needs to find a spot from an awkward draw. Improving three-year-old Randwick filly 6. Aesop’s Fable is well into her prep, and drops back from an average run in listed metro company. Draws to get plenty of cover around midfield, but back up sharply in weight. Lightly raced Dubbo four-year-old 1. Toulon Brook returned to his best sweeping home to win this grade at Narromine after a couple of plain runs. Suited on the long stretch here, but has to carry 61kg. Wyong filly 11. My Desire comes out of the same race as Predictable Miss when sticking on OK after parking right behind the leader. Again draws to get a sweet trail near the speed, and is also deep into her prep.
How to play it: Tigeen each-way and trifecta 4,6,10/1,4,6,10/1,4,6,10,11.
Odds and Evens: Evens.

Tough race, with plenty of hopes. The best is yet to come from four-year-old Newcastle mare 7. Tessa Burrito from the Lees stable who charged home from a mile back here to miss narrowly in a similar race, and looks over the odds. That was only her second run in nearly a year, and can peak third-up from a good trailing draw.
Dangers: Improving Newcastle three-year-old 4. Ski Missile swept home for a dominant maiden win two runs back at only previous start here before battling in a strong BM64 at home. Will find this more to his liking, and drawn OK. Gosford four-year-old 1. Estroverto is way better than his poor winning strike rate suggests. Powered home at Wyong to finally land his maiden two runs back before losing his spot at a vital stage last start. Climbs in weight and up in trip, but will relish the bigger track. Promising filly and another one from the Lees stable, 9. Leisa Louise has made a strong start to her career charging over the top to win her maiden at Port Macquarie before again finishing hard in a class 1 at Tamworth. Both runs, though, were in heavy ground, and drawn right off the track for first try on firm footing. Include improving Warwick Farm filly 11. Rocquette who found the line well last start, and crying out for this longer trip.
How to play it: Tessa Burrito and Ski Missile both each-way.
Odds and Evens: Odds.

Hard to go past promising four-year-old mare 7. Strawb from the Nathan Doyle stable at Newcastle, who resumed in terrific fashion motoring home for a dominant BM58 win this track despite drifting to a big price and the form from that already looks solid. Will go a long way back again from the widest barrier, and look to repeat the dose.
Dangers: Four-year-old Newcastle gelding 3. Schemer was ridden closer last start, and kept finding the line, but better ridden further back over slightly more ground. Four-year-old home-track gelding 1. Black Sunrise can take the next step after landing a good quality maiden first-up off a long break, but rises in weight while 9. Pure Faith didn’t fire on a bog track at Tamworth last start, but won her previous two, and can rebound sharply back on home track in firmer ground. Was scratched from Armidale on Sunday.
How to play it: Strawb to win.
Odds and Evens: Odds a special.

Back to the sprint trip for an exciting finish. Keen on three-year-old gelding 7. Step On Fire from the local Cameron Crockett yard at only his third start. Gave nothing else a chance when careering away for a dominant maiden win two runs back before dropping out at Armidale, but he was found to have a slow recovery rate. Has since trialled smartly, and former rider takes 1.5kg off.
Dangers: Improving Newcastle three-year-old 2. Cool World powered home to win a class 1 first-up here, but up to 60kg from a wide draw is a tough ask. Watch the betting on home-track four-year-old 3. Morpheus who resumes off a near 10-month break, but looked sharp winning the second of two trials. Rival local four-year-old 5. Joey’s Chance has a sound record and well capable in this grade, but starting to test punters’ patience having finished off into a place in three of his last four.
How to play it: Step On Fire to win.
Odds and Evens: Split.