admin April 21, 2020 Federal Politics Comments Off on Australia Post reduces letter deliveries as it faces a decade’s worth of disruption 34 Views 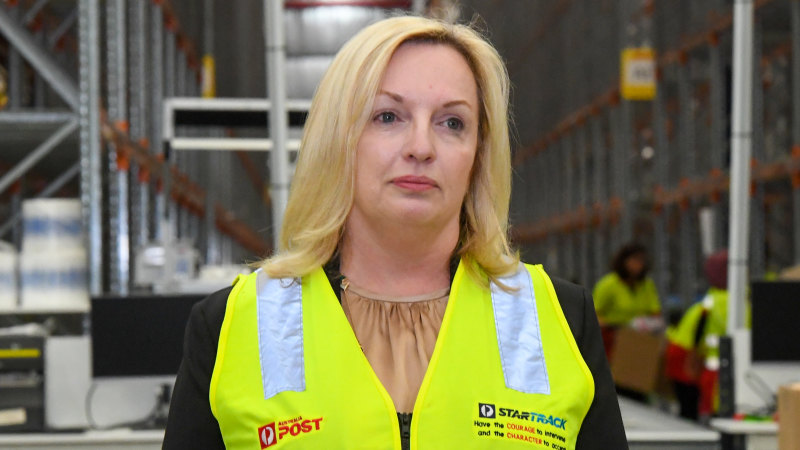 Ms Holgate said the number of parcels was up 80 per cent over the last four weeks – and more than 100 per cent on some days – but there has been “extreme volatility” in other parts of the business. Letters have dropped 50 per cent some days and unaddressed mail, used by businesses for promotional material, has collapsed by 75 per cent. Passport business is down 50 per cent.

“It’s almost like we have had five or 10 years squashed into one month,” Ms Holgate told The Sydney Morning Herald and The Age. “The amount of decline that we could probably have expected over five years has happened in letters, but in parcels there has also been that massive growth.”

Business and government account for 97 per cent of letter volumes and the “hibernation” across the economy has cut that demand, with many companies also turning to online alternatives to mail.

“Some of this will mean that letter volumes won’t completely return after the crisis,” she said.

Under the government’s announcement, the country’s 4300 post offices will also have more discretion to close in exceptional circumstances during the pandemic but are generally expected to remain open.

Ms Holgate said the government’s announcement would allow the company to retrain up to 2000 motorbike postal workers to deliver parcels, making better use of the workforce and relieving the pressure on van delivery drivers.

“Being able to do that makes our business more efficient and we will be able to protect that letter business for longer,” she said, predicting the changes would make parcel delivery faster in parts of the country.

“These announcements today are probably the biggest thing that will have happened to Australia Post in 20 years.”

She would not be drawn on whether she wanted the changes to be permanent, saying it was too early to tell and she wanted to get feedback from customers.

Australia Post made a profit of $41 million in 2019, down from $125 million the year before, but Ms Holgate couldn’t say whether the business would be plunged into the red this year because the impact on operations had been so “unpredictable” and volatile.

“It’s too early to predict what the bottom line will be at the end of two and a half months and I know that sounds ridiculous but who would have thought a month ago, we would have had double the volume from parcels,” Ms Holgate said.

While letter volumes have dropped to half what they were at their peak, Ms Holgate said she did not want to save money by reducing letter deliveries to once a week, an option floated by a strategic review of the business in 2018.

“It’s not what our communities are asking for so it’s nothing we are pursuing,” she said.

She said the company was instead seeking to “repurpose” posties with delivery duties so they could maintain their important role in communities. She said Australia Post would carry 1.5 billion to 2 billion letters this year and it remained a significant part of the business.