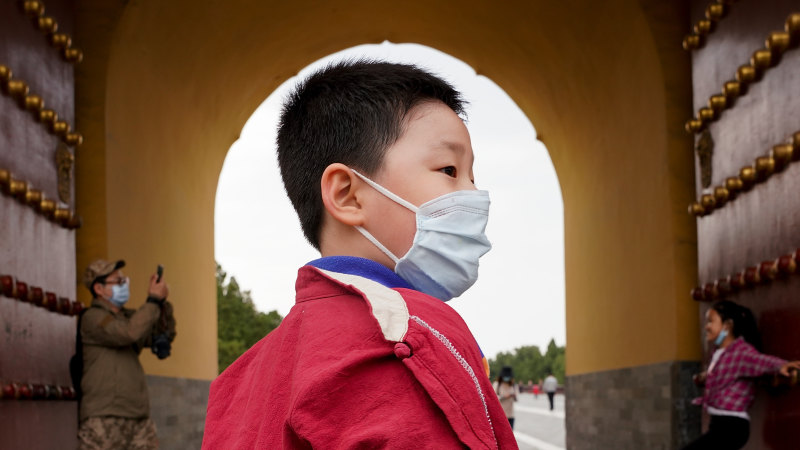 “We have rolled over again travel restrictions we currently have in place with outbound and inbound and we have no plans to change any of those,” Mr Morrison said. He would not comment on whether there had been any direct communication with the Chinese government. The coronavirus has further strained already deep tensions at the highest levels of both governments, as China’s Foreign Ministry accuses Australia of “dancing to the tune” of the United States.

Beijing’s Chaoyang district, home to dozens of foreign embassies, has been designated a high-risk area after a family of three became infected, the first new cases in the city for 27 days according to the Beijing Centre for Disease Prevention and Control.

A popular shopping area has been fenced off and checkpoints enhanced. Three areas in Heilongjiang province, near the Russian border have also been classed as medium risk. Harbin, the capital, has seen more than 50 cases after dozens of new transmissions.

The executive director of the Asia Pacific Studies Centre at East China Normal University in Shanghai, Chen Hong, said precautionary measures have been put in place with contingency plans for further outbreaks.

“The greatest challenge is the risk of a second or third wave of the outbreak,” he said. “One thing good is that although many aspects of the virus still remain unknown, we now understand how it works. The people are better prepared for restrictive measures which have proved to be effective.”

Health authorities have also bumped up testing of foreigners as part of their coronavirus suppression tactics.

Tensions between Chinese and African governments over the treatment of migrants from Nigeria, Ghana, Ethiopia and others forced the Foreign Affairs Office of the provincial government in Guangdong to issue an open letter over the weekend urging local authorities to “treat all Chinese citizens and foreign nationals equally”.

The pressure has been compounded by an increasing number of imported cases brought back into the country by residents returning home from overseas. The National Health Commission reported on Tuesday that of the 11 new confirmed cases on April 20, four were imported.

The city state of Singapore and Japan’s second largest island Hokkaido are also preparing for a second wave of cases, after earlier flattening the curve of the virus.

Hokkaido recorded more than 130 mostly locally transmitted infections last week, forcing it to re-impose a state of emergency it had lifted a month earlier. Infections per day had previously fallen into the single-digits.

Singapore reported its largest single-day spike on Monday, taking its total past Australia to more than 8000 infections after testing foreign worker dormitories. The city-state had largely suppressed the virus to incremental increases through tough social distancing measures until this week.

Mr Morrison said in Canberra on Tuesday the experience showed authorities should not be lulled into a false sense of security. “It is a reminder that even a country as diligent and careful as Singapore has been that none of us can be complacent about this virus,” he said.