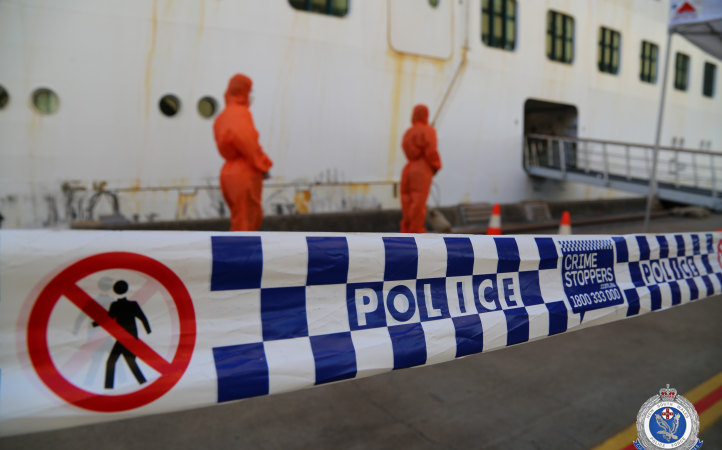 In the maritime arrival report, the ship’s doctor Ilse Von Watzdorf said there were 24 people with a temperature over 38 degrees.

It was only after passengers had disembarked on March 19 that an updated log was provided to NSW Health, the commission heard.

In an email extract read to the hearing, Dr Von Watzdorf apologised to authorities, saying she had not had time to send an updated log before passengers disembarked.

“I’ll send it now, sorry I forgot. That last one was from the morning, it was so crazy,” she wrote on March 20.

The updated report included additional passengers who had attended the ship’s medical centre with acute respiratory and influenza-like symptoms.

The embattled cruise liner is set to leave Australian waters for the Philippines at 4pm on Thursday after 57 crew members were taken off the ship on Tuesday to begin a repatriation process.

The Ruby Princess is then expected to be back at sea in early July, when the vessel will offer round-trip cruises from Seattle during the northern hemisphere summer.

The ship’s first voyage will depart Seattle on July 4, with cabin prices starting from $699 per person, according to Princess Cruises, which operates the ship.

Dr Von Watzdorf said she was surprised almost 2700 passengers were allowed to disembark the ship in Sydney while COVID-19 test results were pending.

She said she would have waited to receive results had it been her decision, given there were passengers with symptoms consistent with illnesses including COVID-19.

“I was surprised we were allowed to do that without waiting for the results to come through,” Dr Von Watzdorf told the commission via a video-link aboard the ship.

As the hearing began, the legal counsel for Princess Cruises made an application for the commission’s hearings to be held in secret.

But Mr Walker said the hearings would be heard in public, adding that his report from the inquiry would long precede anything “in the nature of criminal proceedings.”

Mr Walker is due to hand down his report on August 14. Police and coronial investigations are also under way, but it could be a year before they are finalised.

Dr Von Watzdorf had earlier acknowledged that she recalled a document was issued to passengers by the Australian government, prior to disembarkation, which outlined the risks of the coronavirus and the obligation of passengers to self-isolate for 14 days.

Counsel assisting the commission Richard Beasley SC put it to Dr Von Watzdorf that considering “what was known about coronavirus,” the warning given to passengers and “the fact there were still outstanding COVID-19 swabs for passengers on board … it was also a risk to allow those people to go out amongst the community at least until the time those test results were back?”

She told the commission it would not be correct to say nobody on board was showing signs of COVID-19 on March 18 and 19 2020, shortly before the ship arrived in Sydney.

“Anyone who said something like that would be,in your opinion, very wrong to do so. Would that be right?” Mr Walker asked Dr Von Watzdorf.