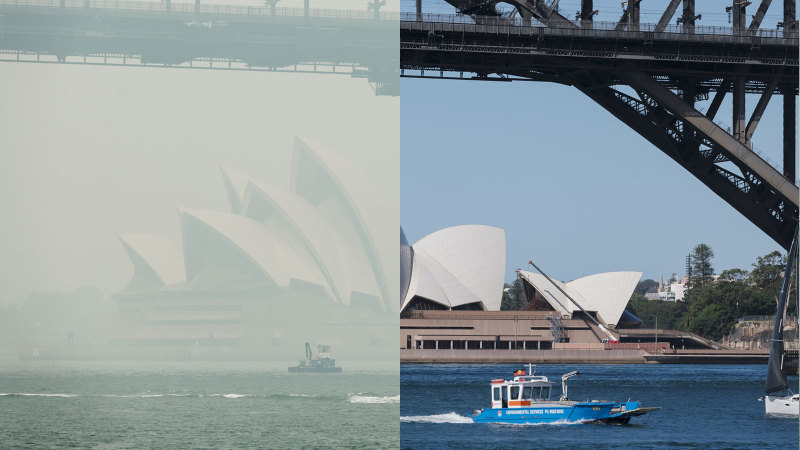 In sites such as Randwick in the east, Macquarie Park in the north and Liverpool in the south, readings averaged between 4-6 per cubic metre in those two months, compared with 20-30 or higher in December when bushfires raged near the city. Late 2017 was the last time the sites had similarly low readings.

The latest figures compare with a background level of about 5 per cubic metre, and the national health standard of 25. During the height of the bushfires average daily reading exceeded 150 in places such as Liverpool in December, the data shows. Reduced traffic was one factor in cutting levels of pollutants such as carbon monoxide, as were more natural influences.

“An assessment of recent carbon monoxide (CO) pollution for 1 March to 8 April at sites in Sydney, Newcastle and Wollongong show some reduction in pollution when compared to the same weeks in previous years,” he said. “CO levels in NSW are well below national standards and there are many periods where the monitoring instruments are measuring at or near their minimum detection limit [of] 0.05 parts per million.”

The spell of unusually clear air, though, will likely be disrupted for a few days at least as agencies ramp up prescribed burning as they attempt to reduce fuel loads before next spring’s fire season.

A “substantial” fire is planned for the Hornsby area this weekend, an RFS spokesperson said.

“The window of opportunity [for hazard-reduction burning] seems to be getting smaller each year, ” she said. “So it’s important to make the most” of the ideal conditions, including light winds.

Coal-fired power plants are another source of pollution that can end up in the Sydney Basin. Recent weeks have also seen a reduction in output as power stations undergo maintenance after the utilities ran hard during the summer, according to Hugh Saddler, honorary associate professor at the Australian National University.

Over the past four weeks, two of the four units at AGL’s Liddell plant were out, while one of the four at the nearby Bayswater power station has also been offline lately, he said. Easter Saturday was particularly notable with renewable energy supplying a record share of more than half of the power for the National Electricity Market for about four hours during the day.

“On 11 April every [coal-fired] unit then operating was down at a minimum level for most of the day,” Dr Saddler said.

Previous Massive rise as 382 players seek help for mental wellbeing
Next From the Archives, 2019: Pies hold off Dons in Anzac Day thriller