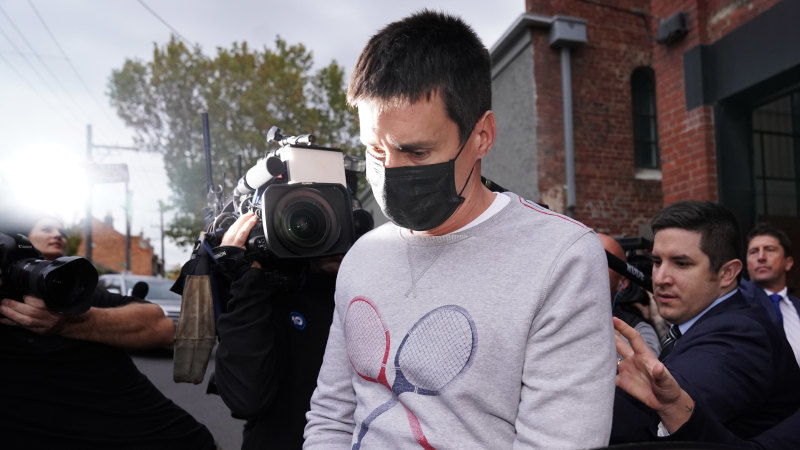 The 41-year-old allegedly left the scene of the crash on foot. Police made contact with him overnight.

He was questioned by detectives on Thursday morning and then taken back to his home in Collingwood.

His love for Porsches is strewn across his social media profiles.

In reviews on the travel site TripAdvisor, he talked about how he liked to drive the car behind the SkyBus so he could use the free WiFi.

“I set the cruise control so as to allow me to social network and all that cool new age type stuff that’s all the rage,” he wrote, also uploading a picture of the car. There is no suggestion Mr Pusey was holding his phone or breaking any road rules.

“Me and my Porsche enjoy the day out doing this activity.” In another review he described a helicopter as a “Porsche in the sky”.

He was also once caught on film verbally abusing a cancer patient.

In a segment aired on Nine’s A Current Affair, he was captured shouting at the woman that she should “get some more f—ing cancer” after he had a dispute with her husband, a tradie who he had worked with.

“Have fun having f—ing cancer cow … I hope you die,” he said.

Court documents show he was taken to Victorian Civil and Administrative Tribunal several years ago after he took issue with a kitchen installed in 2014 by Bayside Cabinet Makers at a property he owned in Mitcham, refusing to pay them the remaining $6000 of the bill.

Despite multiple attempts to appeal, a VCAT judge ordered Mr Pusey to pay the money and said his actions throughout the claim amounted to an “abuse of process”.

Mr Pusey also once launched a civil claim in VCAT against audio hardware company Bose after he said his earphones had developed a “crackling sound”. This claim was also dismissed.

He sold a historic Melbourne CBD building last year for $4.4 million after buying it three years earlier for $2.8 million.

Mr Ashton described the alleged actions of Mr Pusey in taking the photographs and leaving the scene as “disgusting”.

“I don’t want to pre-empt the interview with this fella, and what might flow from that. So we need to work through that and understand his knowledge and involvement as part of an investigation of that,” he said.

“Today, when I’m spending time with the family members of those deceased officers, I can tell you it will absolutely disgust them. To leave the scene is a very, very low act in my view.

“If I wasn’t wearing this uniform as Chief Commissioner, I’d be giving you far more colourful language on that.”

Dashcam footage has also surfaced of a black Porsche with the same number plates allegedly speeding on the Eastern Freeway on March 21. There is no suggestion Mr Pusey was driving the car at that time.

Mr Ashton could not confirm the Porsche in the dashcam footage was the car involved in Wednesday’s crash, but he said “it looks pretty similar” and the video would form part of their investigation.