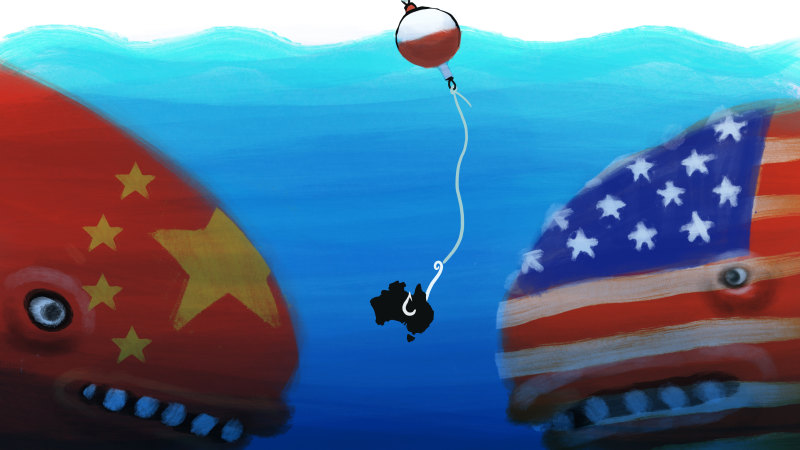 The stickers are a statement. A direct response to the Chinese Communist Party’s increasingly assertive “Wolf Warrior diplomacy” that has seen it attempt to buy political capital in Australia, take aggressive steps in the Pacific, exchange barbs with the United States and wield influence over the World Health Organisation.

These are legitimate concerns about a country accused of judicial and human rights violations from the Muslim “re-education” camps in Xinjiang to Hong Kong democracy protesters. So too are the allegations of negligence and cover-up in its handling of the coronavirus crisis, which this week filtered down to the local council level when Wagga Wagga, NSW, threatened to sever its twin city relationship Kunming, China.

The stasis now goes right to the top. Prime Minister Scott Morrison is one of the few G20 leaders not to have direct contact with China’s President Xi Jinping since the coronavirus outbreak.

In this context, it is worth considering if Australia is getting the best seat it can at a rapidly changing diplomatic table. When former Labor prime minister Kevin Rudd walked out the door, who replaced him?

According to the Australian Trade and Investment Commission, China accounts for $136 billion in Australian trade. It is our number one export market, our largest source of international students, our most valuable tourism market, a major source of foreign direct investment and our largest agricultural goods market.

At the moment, we can not get on the phone.

Inherent in all of this is the great tension between Australia’s foreign affairs and trade arms. One prioritises security, the other economics, within the one government department.

“China might have got us into this crisis but it is also the country most likely to lead us out of it,” Jane Golley, the director of the Australian National University’s China and the World Centre told the Centre for Economic Development this week. “There is a real need to strike a better balance than we have in the past.”

KPMG’s head of Asia and international markets Doug Ferguson said Australia wants to find growth areas in other markets. “It is just not easy to do. India, Europe, frankly do not offer the same scale and acceleration as China.”

If our strategy is walking into a room holding our nose saying we don’t like you but we want to do business with you, inevitably that business is going to go.

Labor has called for a bipartisan China committee that would mark objectives and make policy. Spanning elections and governments it would define what Australia wants out of its relationship with China over 15 years. It would deliver a plan to deal with a country that by 2035 will likely become the world’s largest economy.

That time-frame also once defined Australia’s second major international challenge, the place of China in the Pacific and what was once Australia’s sphere of influence. The coronavirus has just accelerated it.

Our $50 billion submarine program, the only naval platform that will truly allow Australia to patrol its own trading routes in foreign waters – and therefore shore up Australia’s economic interests – is now seriously exposed. Once scheduled for the mid 2020s, the first one is not due until 2035 as Australia’s neighbours face an increasingly assertive China as it begins its own staggered economic recovery from the coronavirus.

To Australia’s north Indonesia and Papua New Guinea face potentially catastrophic coronavirus outcomes. There are early signs it is taking hold in both countries. Indonesia now has 590 virus deaths, the most in Asia outside China, while PNG has cases in four different provinces.

A virus outbreak on the scale seen in China would devastate the less advanced medical systems and economies of both countries. The Pacific, which has developed at a slower rate than anywhere else in the world for the past decade, is similarly exposed.

In this space, Australia is in a relatively unique position. The country is on track to become the first middle-power and along with New Zealand, the only developed economy in the eastern time zone of the Southern Hemisphere to suppress the virus.

In a series of deliberately timed escalations this week, Australia started flexing its new-found diplomatic strength. Foreign Minister Marise Payne called for an independent global inquiry into the origins of the coronavirus on Sunday, a move that was backed by Morrison in discussions with German Chancellor Angela Merkel and French President Emmanuel Macron on Tuesday.

No doubt it was political. Expect Australia to go further.

With the exception of East Timor, Australia has played a largely reactive role in the region, comforted by US hegemony, bobbing like a cork in an ocean of strategic interests. That is now under threat as the coronavirus infects more than 800,000 Americans, while a President already prone to isolationism, turns increasingly inwards to confront a profound domestic health crisis and a personal challenge – his own re-election in November.

Does a resilient Australia step into the void? The government’s Pacific step-up is crucial in this environment. It is well capitalised with a $2 billion infrastructure financing initiative but it can not compete with the trillions being spent on Beijing’s Belt and Road.

Australia’s government departments and universities are among the top Pacific experts in the world and our soft-diplomacy through cultural connections and rugby league is well regarded, but until China started loaning millions of dollars for local infrastructure in Vanuatu and PNG, the political relationship was largely taken for granted.