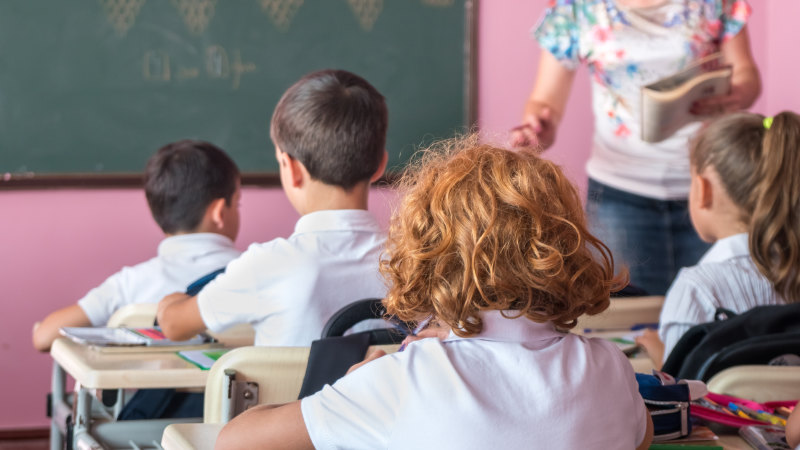 Prime Minister Scott Morrison emerged from a national cabinet meeting on Friday to urge teachers to return to work like supermarket workers, bus drivers and others who were working while meeting rules designed to prevent the spread of the virus.

“Their risk is not in the classroom – their risk is in the staff room,” he said of the teachers.

State figures show that infections among school-age children make up a very small proportion of COVID-19 cases across the country.

People aged 19 and under accounted for 122 cases of the virus in NSW out of a state total of 2976, according to figures up to Thursday night. All but five of these have recovered.

The same age group accounted for 58 cases in Victoria out of a state total of 1343 people as at Friday morning, with all but two recovered. One the active cases is a teenage boy and the other is a girl aged 4 and under.

Of the 1026 cases in Queensland up to midday on Friday, only 48 were aged 19 or under. but the state government declined to say how many had recovered.

There have been 17 cases in South Australia among those aged 19 and under, out of a state total of 438, and all have recovered.

There are more than 1.2 million school students in NSW, more than 990,000 in Victoria and more than 830,000 in Queensland, according to the Australian Bureau of Statistics.

Mr Morrison said the updated advice from the Australian Health Protection Principal Committee – made up of federal and state chief medical officers – did not require classrooms to meet the social distancing rules for other spaces.

The usual rules are for people to stay 1.5 metres away from each other and for internal spaces to be limited to one person for every four square metres.

“They need to ensure they have social distancing happening in the lunch room and the staff room and at drop off and at pick up and their engagement with parents,” he told Sky News on Friday after the national cabinet meeting.

Commonwealth Chief Medical Officer Brendan Murphy said the risk of transmission in schools was low because COVID-19 was very different to influenza, which spread quickly among the young.

Asked whether the low rates among children reflected a lack of testing in that age group, Professor Murphy rejected this concern and pointed to the imminent NSW study.

“New South Wales Health have just done a very large study looking at some infections that have occurred in the school setting and have tested a lot of children [and] have not found evidence that children are transmitting this virus in schools.”

The report by the National Centre for Immunisation Research and Surveillance for NSW Health is due to be released on Sunday.

In another clash between federal and state governments on schools, Home Affairs Minister Peter Dutton accused Queensland premier Annastacia Palaszczuk of “running scared” of the Queensland Teachers’ Union because she would not resume full classes.

The union told members they should not allow too many children back to the classroom because it would be “physically impossible” to meet the social distancing rules, but the statement was made before the AHPPC confirmed the 1.5 metre rule did not apply.